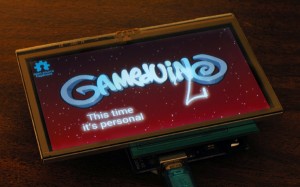 James Bowman, creator of the Gameduino game adapter for microcontrollers, recently made an upgrade to the system adding a Future Technology Devices International (FTDI) FT800 chip to drive the graphics. Associate Editor Nan Price interviewed James about the system and its capabilities.

NAN: Give us some background. Where do you live? Where did you go to school? What did you study?

JAMES: I live on the California coast in a small farming village between Santa Cruz and San Francisco. I moved here from London 17 years ago. I studied computing at Imperial College London.

NAN: What types of projects did you work on when you were employed by Silicon Graphics, 3dfx Interactive, and NVIDIA?

NAN: How did you come up with the idea for the Gameduino game console?

JAMES: I paid for my college tuition by working as a games programmer for Nintendo and Sega consoles, so I was quite familiar with that world. It seemed a natural fit to try to give the Arduino some eye-catching color graphics. Some quick experiments with a breadboard and an FPGA confirmed that the idea was feasible.

NAN: The Gameduino 2 turns your Arduino into a hand-held modern gaming system. Explain the difference from the first version of Gameduino—what upgrades/additions have been made? 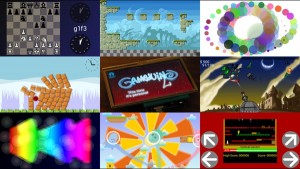 JAMES: The original Gameduino had to use an FPGA to generate graphics, because in 2011 there was no such thing as an embedded GPU. It needs an external monitor and you had to supply your own inputs (e.g., buttons, joysticks, etc.). The Gameduino 2 uses the new Future Technology Devices International (FTDI) FT800 chip, which drives all the graphics. It has a built-in color resistive touchscreen and a three-axis accelerometer. So it is a complete game system—you just add the CPU.

NAN: How does the Arduino factor into the design?

An Arduino, Ethernet adapter, and a Gameduino

JAMES: Arduino is an interesting platform. It is 5 V, believe it or not, so the design needs a level shifter. Also, the Arduino is based on an 8-bit microcontroller, so the software stack needs to be carefully built to provide acceptable performance. The huge advantage of the Arduino is that the programming environment—the IDE, compiler, and downloader—is used and understood by hundreds of thousands of people.

NAN: Is it easy or possible to customize the Gameduino 2?

JAMES: I would have to say no. The PCB itself is entirely surface mount technology (SMT) and all the ICs are QFNs—they have no accessible pins! This is a long way from the DIP packages of yesterday, where you could change the circuit by cutting tracks and soldering onto the pins.

I needed a microscope and a hot air station to make the Gameduino2 prototype. That is a long way from the “kitchen table” tradition of the Arduino. Fortunately the Arduino’s physical design is very customization-friendly. Other devices can be stacked up, adding networking, hi-fi sound, or other sensor inputs.

NAN: The Gameduino 2 project is on Kickstarter through November 7, 2013. Why did you decide to use Kickstarter crowdfunding for this project?

JAMES: Kickstarter is great for small-scale inventors. The audience it reaches also tends to be interested in novel, clever things. So it’s a wonderful way to launch a small new product.

NAN: What’s next for Gameduino 2? Will the future see a Gameduino 3?

JAMES: Product cycles in the Arduino ecosystem are quite long, fortunately, so a Gameduino 3 is distant. For the Gameduino 2, I’m writing a book, shipping the product, and supporting the developer community, which will hopefully make use of it.