The proliferation of open-source hardware and software has made do-it-yourself electronics accessible to both professional electrical engineers and newbies. Today we’re just at the start of an exciting DIY revolution that promises innovation, adventure, and new social, creative, and business opportunities. How will you get involved? In this essay, Adafruit founder Limor Fried offers her thoughts on the present and future of open-source technology.

I’m an MIT-trained electrical engineer and founder of Adafruit Industries, an open-source hardware (OSH) company in New York City. Normally, I tell people that we design and manufacture electronic gadgets—mostly kits and parts for students who are learning to become engineers—or project packs for people who didn’t realize that they wanted to get into electronics. But really what we do is teach, and we do that by creating OSH. Every design we make is fully documented and given away for free—to anyone, for any purpose. But we also sell completely assembled designs as products. Most people just buy from the Adafruit store or from one of our many distributors, but there are still thousands who look at what we create as points of origin for their own businesses or products.

Another way to put it: we’re basically like a test kitchen with a restaurant attached to it. We come up with new dishes, write the recipes up for others to follow at home (or in their own restaurants), and also serve up the dishes to those who don’t have all the equipment and ingredients—they just want to chow down. Other aspiring chefs look at our videos and recipes and adapt them for their own kitchens all over the world. And, once in a while, those same cooks turn around and give away one of their techniques or recipes to the community. Not everyone gives back, but that’s OK. Enough people contribute to create a vibrant culture of sharing.

The best part about talking about OSH is how easy it is. So much has happened with OSH in the last few years that it’s not like I need to sell a pipe dream. It’s not some “experimental future” or “speculative fiction” about what could occur. OSH is already happening, so all I have to do to predict its future is to accurately describe what’s going on right now. But first, a brief introduction.

Nearly everyone knows about open-source software (OSS). Sure, you may not be a coder, but you’ve used the Internet, which is pretty much fully made of OSS: websites running the ubiquitous Apache webserver software, displaying customized sites written in Ruby or PHP, drawing on pools of data stored in MySQL databases all running on server computers running the open-source Linux operating system.

The fantastic thing about all this free OSS is how it has helped proliferate the Internet, improving the functionality of the web through rapid mutations in code (that’s the free-as-in-speech part) and driving down the cost to commodity levels (that’s the free-as-in-beer part). The commodification of the Internet—that is, the marginal cost of an blog or email account is so low that it’s essentially free—and indeed nearly all computer software and hardware would not be possible without OSS.

OK, so that’s the state of the Internet as of circa 1995. Although the details have evolved, the essence of OSS is the same. But something interesting started happening a few years ago in the hardware world (i.e., atoms instead of bits): stuff started getting both complex and cheap. Suddenly, everything had a microcomputer inside of it, and if you had a microcomputer, you needed data to crunch. The market for sensors—what would normally be shoved into extremely expensive military hardware—started ballooning. (When I was in college, a triple-axis accelerometer motion sensor would cost $60. Now it costs less than $1.) Once low-cost sensors and easily reprogrammable logic chips started flooding the market, online communities of engineering geeks started to take notice. Engineers start using what they had learned at work to build hobby projects. The parts were finally cheap enough. And as a result, they started laying down the groundwork: compilers, simulators, and toolchains. That was the mid-1990s. Soon thereafter, geek artists started taking a look and liked what they saw. They started designing interactive art, building on some of the great electronic art concepts of the 1970s. And finally, non-geeks had a crack at it. Complex electronics and electrical engineering went from something requiring years of differential equations to weekend fun.

While all this was happening, something cool began occurring. Just as code geeks created OSS to help commodify the Internet, solder geeks decided to apply the same principles to the creation of hardware (both mechanical and electronic). They started sharing schematics, CAD files, and layouts on social websites. Today, designers use a variety of sites (e.g., Instructables.com, Thingiverse.com, and LetsMakeRobots.com) and via various social services (e.g., Flickr, Twitter, Facebook, and Google+) to give away inventions and post tutorials and instructions for free.

The Proliferation of OSH

The first response we can have is this: OK. Free and OSS erased the costs of software while also increasing demand (and thus lowering the price) for desktop computers. Then followed laptops (say, OLPC, which runs exclusively OSS) and finally cell phones (e.g., Android). So, we’ll also see OSH reduce costs and simultaneously speed up iterations of new and better devices by separating the IP control (say, patents) from the ability to manufacture.

There’s also another response we can take to the proliferation of OSH. Not only is it making it easier than ever to design and manufacture original products to fit a group’s needs, it’s also providing a broad curriculum to the world. Someone who has the desire to learn how to build and repair electronics will not learn much by taking apart a modern cell phone—everything is too small, poorly documented, and hidden. But with OSH, documentation is an essential part of the process—describing why a certain component is chosen and possible alternatives gives insight. The student is empowered to trace the design from thought-process to mathematical analysis to specifications to fabrication.

Let’s consider some examples of what is happening in OSH right now. First of all, I’m sure you’ve already heard about 3-D printing from MakerBot. It used to be a technology only available to high-end prototyping houses that could spend the tens of thousands of dollars on both machinery and upkeep. But then about five years ago, a few different groups such as [email protected] and RepRap decided they wanted create low-cost home versions as well as make the projects OSH. So they gave away all the plans with the hopes that others would build, improve, and proliferate the basic plan of low-cost 3-D printing. Now there are over 100 low-cost 3-D printer design variations available for anyone to make. In addition, a massive community is constantly improving the quality, lowering the price, and simplifying things. It’s possible that within a few years we could see 3-D printers that cost $100 and are built of common hardware store parts.

Another example that has promise is the Global Village Construction Set, which is a “manual” of simple, easy-to-repair construction equipment. Instead of high-cost specialized tools from John Deere or Caterpillar, each of a dozen machines can be fabricated using basic steel welding, electrical wiring, and some basic common components. The hope is not that it would replace the many powered tools already available, but that it would enable people to approach the design of new tools without fear that they had nowhere to start from. That is to say, by being broad and simple, it can encourage specialization when needed, whereas most equipment manufacturers would not be interested in selling something unless they had tens of thousands of customers.

Finally, one of my favorite projects is the Dili Village Telco project. There are no phone lines in the East Timor village. There is a cell network, but it’s expensive and not very useful for making calls within the village. David Rowe, a telephony engineer, designed a sort of “micro cell” so that the Timorese in the village could use regular phones to call each other, basically like a little version of AT&T. Rowe designed the very complex hardware, which not only has to work but also has to work well in the difficult environment of a village without cables or consistent power. What I thought was most interesting about the project is how he was giving  away the years’ worth of work, posting up schematics, DSP code, filters, and more with the hope that some company would come by and rip him off. The best thing that could happen for the project is to have the design mass manufactured because then he could get on with the work of deploying and configuring the network boxes instead of figuring out how to get them made.

The Speed & Power of OSH

Now I’ll share personal example of the speed and power of open-source hardware and software. About a year ago, I was mucking about with trying to design a low-cost, high-efficiency solar battery charger. Solar panels are really annoying to deal with, and although there are lots of off-the-shelf solutions for big solar panels—say, over 50 W—there isn’t a lot available for 5 W or under. I ended up designing what I thought was a pretty clever battery charger that used off-the-shelf parts and then began selling it in the Adafruit store. A few months later, I got an e-mail from a fellow who had designed a solar-powered cell phone charger and liked the design and efficiency. He had a Kickstarter going to sell them, and just wanted me to know that he had taken the design and remixed it. Some people would consider such a scenario a nightmare: I spent months in the sun tweaking the design and some guy just rips it off to make money. But I thought it was great. In fact, nothing would make me happier than to hear that every design I’ve worked on and published was used to create a useful product.

So, on to the future! One thing that makes me most excited is the proliferation of low-cost cell phones that are easy to program (Android in particular). Once you take a programmable cell phone and connect ultra-low-cost sensors, you’ve got a global sensor network—a very powerful tool that enables anyone to measure and monitor the environment.

More sensors, more things talking. You’ll hear about the “Internet of Things” a lot more in the future. A lot of OSH makers cross-pollinate from hobbyist projects to manufacturer products to other industries. For instance, you’ll see medical devices get smarter. Quickly being able to pull from a library of open-source projects and make a Kickstarter or some other crowd-funded service will lower the entry barrier for many engineers and makers. Sure, there are challenges once you actually get the funding, but it’s never been a better time to work on OSH and get your designs out there. Previously, capital needed to be raised via venture capitalists, loans, or friends and family.

What I like about the future of electronics—and DIY electronics in particular—is that it’s more than just about the physical bits. The OSH movement has a built-in cause: sharing knowledge. If we can all provide a little more value when we make something, we can develop more things by standing on each other’s shoulders and make more engineers who share the same values. 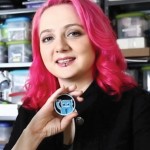 Limor Fried founded Adafruit Industries in 2005. She earned a Bachelor’s in EECS and a Master’s of Engineering from MIT This essay first appeared in CC25 (2011).