Organization and plenty of space to work on projects are the main elements of Dean Boman’s workspace (see Photo 1). Boman, a retired systems engineer, says most of his projects involve home automation. He described some of his workspace features via e-mail:

I have also built a simple logic analyzer, an FPGA programmer, and an EPROM programmer. For PCB fabrication, I have a complete setup from MG Chemicals to expose, develop, etch, and plate boards up to about 6” × 9” in size. 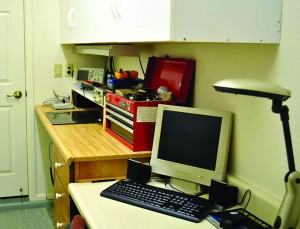 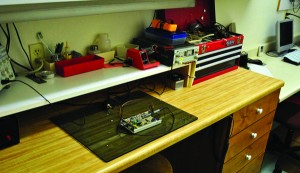 Photo 2: Here is his workbench with the radio transmitter. (Source: D. Boman)

Boman says the 10’ long countertop surface (in the background in Photo 3) is:

Great for working on larger items (e.g., computers). It is also a great surface for debugging designs as you have plenty of room for test equipment, drawings, and datasheets. 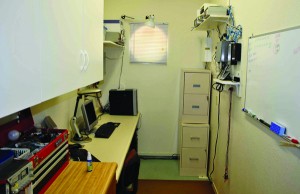 Here is how he described his system setup:

The shelf on the top contains the network routers and the security system. The cabinets on the wall contain an irrigation system controller and a network monitor for network management. I was fortunate in that we built a custom home a few years ago so I was able to run about two miles of cabling in the walls during construction. 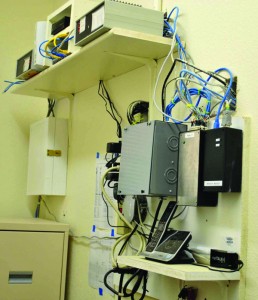 Over the past 10 years or so I have migrated to doing surface-mount designs almost exclusively. I have found that once you get over the learning curve, the surface-mount designs are much simpler to design and troubleshoot then the through-hole type technology. The printed wiring boards are also much simpler to fabricate, which is important since I etch my own boards.

Overall, Boman’s setup is well suited to his interests. He keeps everything handy in well-organized containers and has plenty of testing space In addition, his custom-built home enabled him to run behind-the-scenes cabling, freeing up valuable workspace.

Do you want to share images of your workspace, hackspace, or “circuit cellar”? Send your images and space info to editor<at>circuitcellar.com.