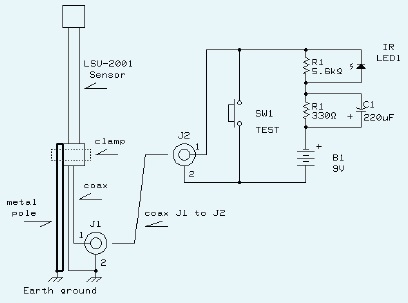 Living on a granite hill during a thunderstorm gave Circuit Cellar founder Steve Ciarcia new respect for Mother Nature. In a classic 1998 article, Steve described how he worked with Circuit Cellar columnist Jeff Bachiochi on a solution to automatically unhook their appliances when large storms hit.

Without a source for a reasonably priced “thunderstorm switch,” Jeff and I decided to make one. Conceivably, all it would take is a lightning sensor, decision logic, and a means to connect and disconnect the attached equipment … 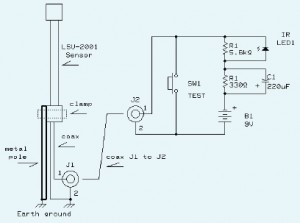 An optically isolated pulse transmitter is connected to a low-cost McCallie Manufacturing lightning sensor mounted on a grounded pole on the roof.

The energy propagated from the current flow of a lightning strike contains wideband energy. Everything from 100 Hz to 100 MHz is produced. Emissions below 100 kHz travel along the wave guide formed by the earth’s surface and the lower ionosphere. With respect to the earth (ground), the air around the strike becomes charged, and there is a direct relationship between the amount of charge and the distance from the strike.

We located a minimum-cost lightning sensor from McCallie Manufacturing. Of the two models available, we chose the LSU2001, which is priced around $50. Simple circuits are also provided for adding a meter or LEDs to monitor live data, or you can connect the sensor through an optocoupler to a PC. Optional software lets you count and graph storm data (providing you wish to keep the PC on day and night).

The hits-per-minute converter also generates a “lightning alarm” output. This signal causes the circuit to physically disconnect the AC power, cable, and phone-line connections to the protected appliance.

The manufacturer suggests mounting the LSU2001 on a well-grounded metal pole. The higher above ground it’s mounted, the farther away you’ll be able to detect lightning strikes. Sensitivity is related to the differential charge between the air and ground—about 0.15 V/m. Put it twice as high, and it will be twice as sensitive.