Home » A Look at Low-Noise Amplifiers

Maurizio Di Paolo Emilio, who has a PhD in Physics, is an Italian telecommunications engineer who works mainly as a software developer with a focus on data acquisition systems. Emilio has authored articles about electronic designs, data acquisition systems, power supplies, and photovoltaic systems. In this article, he provides an overview of what is generally available in low-noise amplifiers (LNAs) and some of the applications.

By Maurizio Di Paolo Emilio
An LNA, or preamplifier, is an electronic amplifier used to amplify sometimes very weak signals. To minimize signal power loss, it is usually located close to the signal source (antenna or sensor). An LNA is ideal for many applications including low-temperature measurements, optical detection, and audio engineering. This article presents LNA systems and ICs.

Signal amplifiers are electronic devices that can amplify a relatively small signal from a sensor (e.g., temperature sensors and magnetic-field sensors). The parameters that describe an amplifier’s quality are: 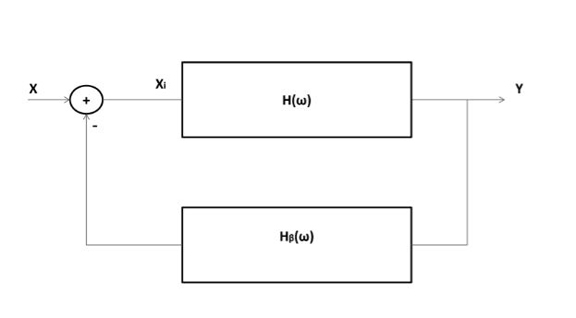 A preamplifier amplifies an analog signal, generally in the stage that precedes a higher-power amplifier.

Both the Linear Technology and Analog Devices amplifiers have voltage noise density at 1 kHz at around 1 nV/√Hz  and also offer excellent DC precision. Texas Instruments (TI)  offers some very low-noise amplifiers. They include the OPA211, which has 1.1 nV/√Hz  noise density at a  3.6 mA from 5 V supply current and the LME49990, which has very low distortion. Maxim Integrated offers the MAX9632 with noise below 1nV/√Hz.

The op-amp can be realized with a bipolar junction transistor (BJT), as in the case of the LT1128, or a MOSFET, which works at higher frequencies and with a higher input impedance and a lower energy consumption. The differential structure is used in applications where it is necessary to eliminate the undesired common components to the two inputs. Because of this, low-frequency and DC common-mode signals (e.g., thermal drift) are eliminated at the output. A differential gain can be defined as (Ad = A2 – A1) and a common-mode gain can be defined as (Ac = A1 + A2 = 2).

Figure 2: The design of a simple preamplifier is shown. Its main components are the Linear Technology LT1128 and the Interfet IF3602 junction field-effect transistor (JFET).

Figure 2 shows a simple preamplifier’s design with 0.8 nV/√Hz at 1 kHz background noise. Its main components are the LT1128 and the Interfet IF3602 junction field-effect transistor (JFET).  The IF3602 is a dual N–channel JFET used as stage for the op-amp’s input. Figure 3 shows the gain and Figure 4 shows the noise response. 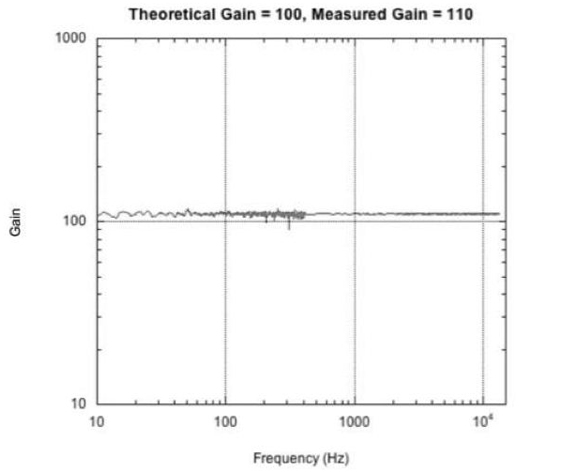 Figure 3: The is a low-noise preamplifier’s gain. 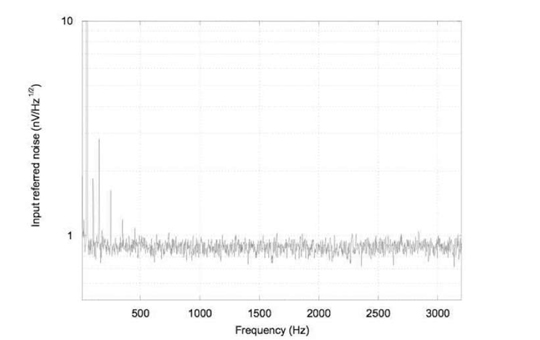 The Stanford Research Systems SR560 low-noise voltage preamplifier has a differential front end with 4nV/√Hz input noise and a 100-MΩ input impedance (see Photo 1a). Input offset nulling is accomplished by a front-panel potentiometer, which is accessible with a small screwdriver. In addition to the signal inputs, a rear-panel TTL blanking input enables you to quickly turn the instrument’s gain on and off (see Photo 1b). 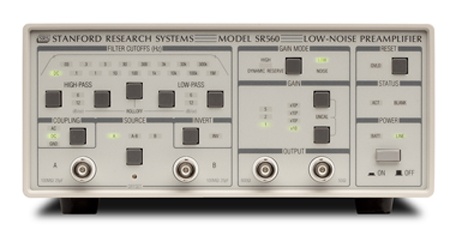 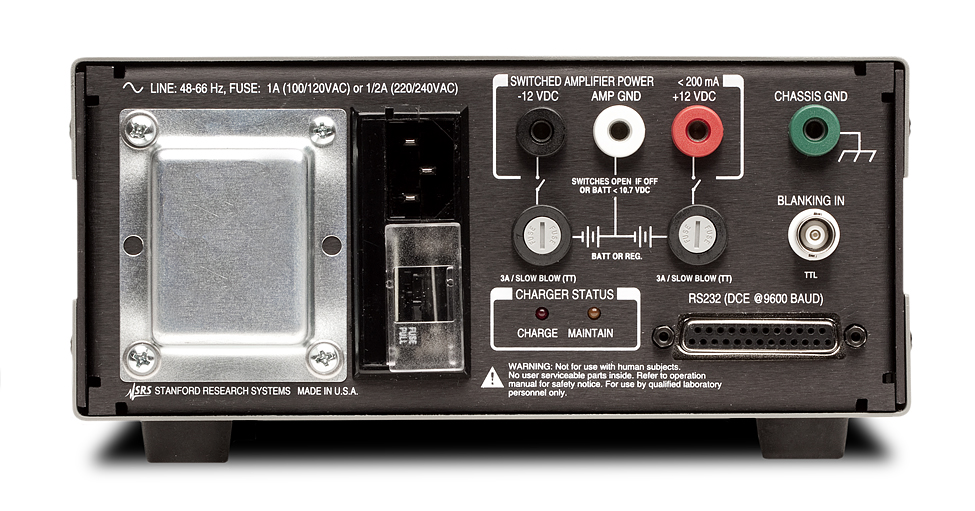 The Picotest J2180A low-noise preamplifier provides a fixed 20-dB gain while converting a 1-MΩ input impedance to a 50-Ω output impedance and 0.1-Hz to 100-MHz bandwidth (see Photo 2). The preamplifier is used to improve the sensitivity of oscilloscopes, network analyzers, and spectrum analyzers while reducing the effective noise floor and spurious response. 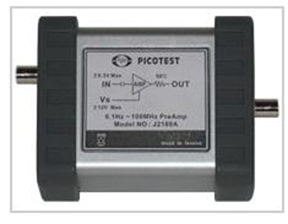 Signal Recovery’s Model 5113 is among the best low-noise preamplifier systems. Its principal characteristics are:

The 5113 (see Photo 3 and Figure 5) is used in applications as diverse as radio astronomy, audiometry, test and measurement, process control, and general-purpose signal amplification. It’s also ideally suited to work with a range of lock-in amplifiers. 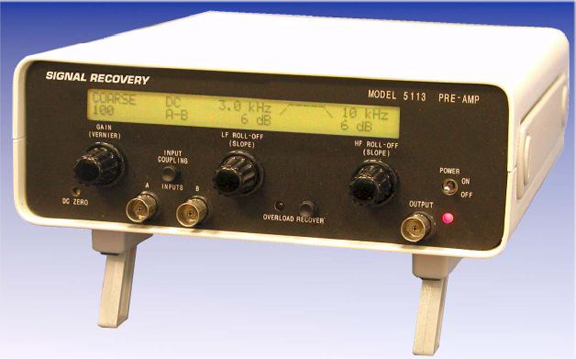 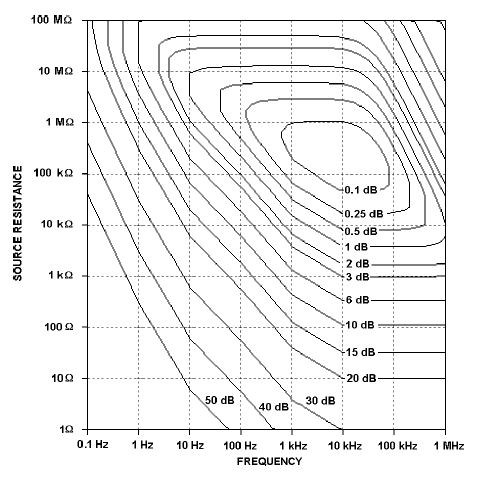 This article briefly introduced low-noise amplifiers, in particular IC system designs utilized in simple or more complex systems such as the Signal Recovery Model 5113, which is a classic amplifier able to obtain different frequency bands with relative gain. A similar device is the SR560, which is a high-performance, low-noise preamplifier that is ideal for a wide variety of applications including low-temperature measurements, optical detection, and audio engineering.

One common LNA amplifier is a satellite communications system. The ground station receiving antenna will connect to an LNA, which is needed because the received signal is weak. The received signal is usually a little above background noise. Satellites have limited power, so they use low-power transmitters.

Telecommunications engineer Maurizio Di Paolo Emilio was born in Pescara, Italy. Working mainly as a software developer with a focus on data acquisition systems, he helped design the thermal compensation system (TCS) for the optical system used in the Virgo Experiment (an experiment for detecting gravitational waves). Maurizio currently collaborates with researchers at the University of L’Aquila on X-ray technology. He also develops data acquisition hardware and software for industrial applications and manages technical training courses. To learn more about Maurizio and his expertise, read his essay on “The Future of Data Acquisition Technology.”

A Look at Low-Noise Amplifiers