Home » A Coding Interface for an Evaluation Tool

John Peck, a test engineer at Knowles Electronics in Itasca, IL, has used ASCII interfaces to test equipment since he was a graduate student.

“I love test equipment with open, well-documented, ASCII command sets,” he says. “The plain text commands give a complicated instrument a familiar interface and an easy way to automate measurements.”

So when Peck needed to automate the process of reading his ultrasonic range finder’s voltage output, he wanted an ASCII interface to a voltmeter. He also wanted the meter to convert volts into distance, so he added an Atmel AVR Butterfly microcontroller into the mix (see Photo 1). “I thought it would be easy to give it a plain text interface to a PC,” he says. 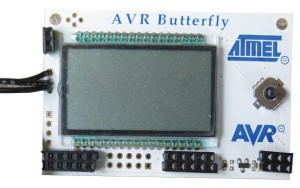 The project became a bit more complex than he expected. But ultimately, Peck says, he came up came up with “a simple command interface that’s easy to customize and extend. It’s not at the level of a commercial instrument, but it works well for sending a few commands and getting some data back.”

If you would like to learn more about how to send commands from a PC to the AVR Butterfly and the basics of using the credit card-sized, single-board microcontroller to recognize, parse, and execute remote commands, read Peck’s article about his project in Circuit Cellar’s May issue.

In the italicized excerpts below, he describes his hardware connections to the board and the process of receiving remote characters (the first step in receiving remote commands). Other topics you’ll find in the full article include setting up a logging system to understand how commands are being processed, configuring the logger (which is the gatekeeper for messages from other subsystems), recognizing and adding commands to extend the system, and sending calibration values.

Peck programmed his system so that it has room to grow and can accommodate his future plans:

“The resulting memory map file shows a 306-byte .data size, a 49-byte .bss size, and a 7.8-KB .text size. I used roughly half of the AVR Butterfly’s flash memory and about a third of its RAM. So there’s at least some space left to do more than just recognizing commands and calibrating voltages.”

“I’d like to work on extending the system to handle more types of arguments (e.g., signed integers and floats). And I’d like to port the system to a different part, one with more than one USART. Then I could have a dedicated logging port and log messages wouldn’t get in the way of other communication. Making well-documented interfaces to my designs would help me with my long-term goal of making them more modular.” 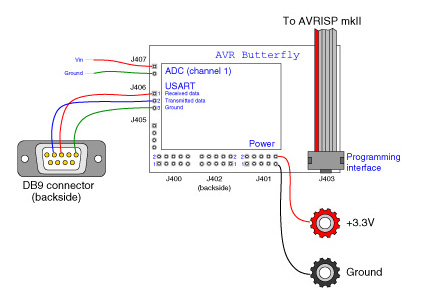 Figure 1: These are the connections needed for Atmel’s AVR Butterfly. Atmel’s AVRISP mkII user’s guide stresses that the programmer must be connected to the PC before the target (AVR Butterfly board).

WORKING WITH THE AVR BUTTERFLY
The AVR Butterfly board includes an Atmel ATmega169 microcontroller and some peripherals. Figure 1 shows the connections I made to it. I only used three wires from the DB9 connector for serial communication with the PC. There isn’t any hardware handshaking. While I could also use this serial channel for programming, I find that using a dedicated programmer makes iterating my code much faster.

A six-pin header soldered to the J403 position enabled me to use Atmel’s AVRISP mkII programmer. Finally, powering the board with an external supply at J401 meant I wouldn’t have to think about the AVR Butterfly’s button cell battery. However, I did need to worry about the minimum power-on reset slope rate. The microcontroller won’t reset at power-on unless the power supply can ramp from about 1 to 3 V at more than 0.1 V/ms. I had to reduce a filter capacitor in my power supply circuit to increase its power-on ramp rate. With that settled, the microcontroller started executing code when I turned on the power supply.

After the hardware was connected, I used the AVR downloader uploader (AVRDUDE) and GNU Make to automate building the code and programming the AVR Butterfly’s flash memory. I modified a makefile template from the WinAVR project to specify my part, programmer, and source files. The template file’s comments helped me understand how to customize the template and comprehend the general build process. Finally, I used Gentoo, Linux’s cross-development package, to install the AVR GNU Compiler Collection (AVR-GCC) and other cross-compilation tools. I could have added these last pieces “by hand,” but Gentoo conveniently updates the toolchain as new versions are released. 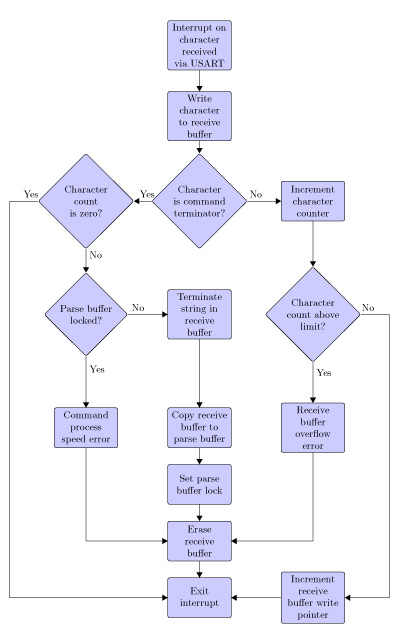 Figure 2: This is the program flow for processing characters received over the Atmel AVR Butterfly’s USART. Sending a command terminator (carriage return) will always result in an empty Receive buffer. This is a good way to ensure there’s no garbage in the buffer before writing to it.

HANDLING INCOMING CHARACTERS
To receive remote commands, you begin by receiving characters, which are sent to the AVR Butterfly via the USART connector shown in Figure 1. Reception of these characters triggers an interrupt service routine (ISR), which handles them according to the flow shown in Figure 2. The first step in this flow is loading the characters into the Receive buffer. 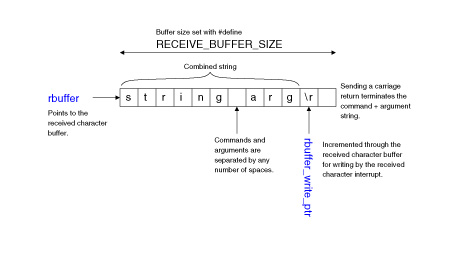 Figure 3: The received character buffer and pointers used to fill it are shown. There is no limit to the size of commands and their arguments, as long as the entire combined string and terminator fit inside the RECEIVE_BUFFER_SIZE.

Figure 3 illustrates the Receive buffer loaded with a combined string. The buffer is accessed with a pointer to its beginning and another pointer to the next index to be written. These pointers are members of the recv_cmd_state_t-type variable recv_cmd_state.

This is just style. I like to try to organize a flow’s variables by making them members of their own structure. Naming conventions aside, it’s important to notice that no limitations are imposed on the command or argument size in this first step, provided the total character count stays below the RECEIVE_BUFFER_SIZE limit.

When a combined string in the Receive buffer is finished with a carriage return, the string is copied over to a second buffer. I call this the “Parse buffer,” since this is where the string will be searched for recognized commands and arguments. This buffer is locked until its contents can be processed to keep it from being overwhelmed by new combined strings.

Sending commands faster than they can be processed will generate an error and combined strings sent to a locked parse buffer will be dropped. The maximum command processing frequency will depend on the system clock and other system tasks. Not having larger parse or receive buffers is a limitation that places this project at the hobby level. Extending these buffers to hold more than just one command would make the system more robust.

Editor’s Note: If you are interested in other projects utilizing the AVR Butterfly, check out the Talk Zombie, which won “Distinctive Excellence” in the AVR Design Contest 2006 sponsored by ATMEL and administered by Circuit Cellar. The ATmega169-based multilingual talking device relates ambient temperature and current time in the form of speech (English, Dutch, or French).

A Coding Interface for an Evaluation Tool