Aimtec has introduced its AM45W-NS series feature an ultra-wide 150-1500VDC input range with dual separated outputs.The AM45W-NST with an output power of 45W has the largest input voltage range on the market, ranging from 150-1500VDC and can reach a maximum of 1600VDC for up to 1 second. In addition, the new series comes equipped with a regulated dual output signal and a high input to output isolation of 4000VAC tested over a 60 second cycle during manufacturing. 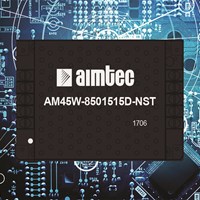 The series also supports 3 Nominal input voltage levels of 200, 850 & 1400VDC and separates the output voltages to two ±15VDC outputs. Operating temperature are within the -40°C to 85°C range. This series is designed to meet the solar energy conversion into DC electricity requirements for Photovoltaic Power Generation and High-voltage Inverters.