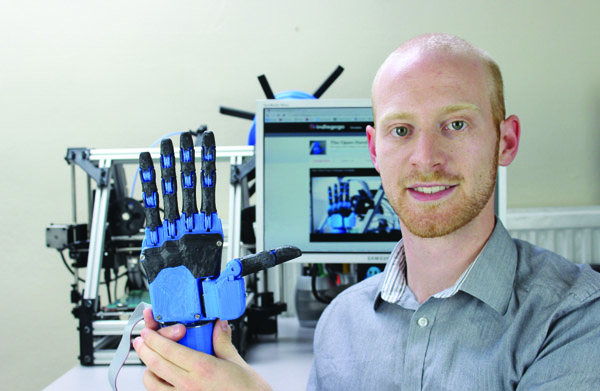 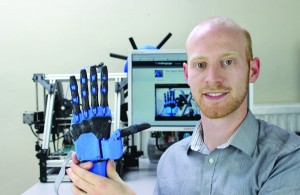 UK-based inventor and robotist Joel Gibbard used a 3-D printer to design and build a prosthetic robotic hand. He founded the Open Hand Project with the goal of making the prosthetic hands available for amputees.

NAN: Give us some background. Where do you live? Where did you go to school? What did you study?

JOEL: I was born in Bristol, UK, and grew up in that area. Bristol is a fantastic place for robotics in the UK, so I couldn’t have had a better place to start from. There’s a lot to engage children here, like the highly popular @Bristol science museum. I studied for a degree in Robotics at the University of Plymouth, which encourages a very practical approach to engineering. Right from the first year we were working with electronics, robotics, and writing code.

NAN: When did you first start working with robotics?

JOEL: The first robots I ever made were using the Lego MINDSTORMS NXT robotics kits. I was very lucky because these were just starting to come out when I was about 6 or 7 years old. I think from ages three to 15 every single birthday or Christmas present was a new Lego set. To this day, I still think Lego is the best tool for rapid prototyping in the early stages of an idea.

NAN: Tell us about your first design/some of your early projects. Do you have any photos or diagrams?

JOEL: The earliest project I remember working on with my father was a full-scale model of the space shuttle complete with robotic arm and fully motorized launch pad. When on the launch pad it was almost my height. I think my father took having kids as an opportunity to get back into making things. We also made a Saturn 5 rocket, Sydney Harbour Bridge and Concorde. One of my first robots was a Lego Technic creation. It had tracks, a double-barreled gun on one arm, a pincer on the other, and a submarine on the back, just in case. I think I was about eight years old when I made it.

NAN: You originally developed the Dextrus robotic hand while you were at the University of Plymouth. Why did you design the system? How has its development progressed since the original concept? 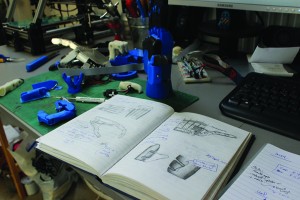 JOEL: I have a sketchbook of around 10 to 20 inventions that are options for the next thing I want to make. This grows faster than it shrinks. One day I was thinking about what to make next and the thought occurred to me that if I were to lose my hand, I wouldn’t be able to make anything. So it made the most sense to design a hand to have just in case. Once I have that, heaven forbid I need to; I could use it to then make a better hand, and so forth, until I have a robot hand that is as good as a human hand. It sounds ridiculous, but that was enough motivation for me to make the first one. 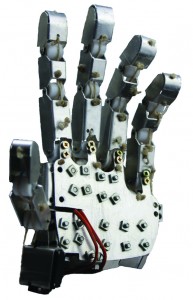 This is an early version of the Dextrus hand.

After posting the project on YouTube, I received comments from people asking to have the designs to make their own, which wasn’t really possible, since it was such a one-off prototype. But I thought it was a good idea. Why not make an open-source hand? After that, I looked more into prostheses and discovered that this is really necessary and people want it.

NAN: The Dextrus incorporates 3-D printed parts. How does the 3-D printing factor in your design? Does it make each hand customizable?

JOEL: 3-D printing is essential to the design. Many of the parts have cavities inside them, which wouldn’t be possible to make using injection molding. One would have to make the parts in two halves then glue them together, which creates weak points. With 3-D printing, each part is one solid piece with cavities for the tendons to slide through.

Customization is a great area to explore in the future. It’s quite easy to modify things like the length and shape of the fingers while maintaining the functionality of the hand. In the not-too-distant future, I could envisage an amputee 3-D scanning their remaining hand and sending the scan to me. I could then reverse it and match their Dextrus hand (approximately) to the dimensions of their other hand. 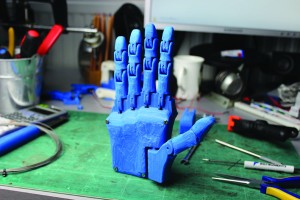 NAN: There are three types of Dextrus robotic hands: The Dextrus, the Dextrus EMG, and the Dextrus Research. Can you describe the differences?

JOEL: They have the same basic design and components. The Dextrus and Dextrus EMG are exactly the same, but the EMG comes with all of the extras that enable someone to use it as a myoelectric prosthesis. The Dextrus Research has a number of differences that result in a more robust (but more expensive and heavier) hand. It has steel ball bearings instead of nylon bushes and is printed with denser plastic. It also comes with everything you need to use it straight out of the box (e.g., a power supply).

NAN: You founded the Open Hand Project as a result of your work on the Dextrus robotic hand. Describe the project and its purpose.

JOEL: The aim of the Open Hand Project is to make advanced prosthetic hands more accessible to amputees. It has the potential to revolutionize the prosthetics industry by trivializing the cost of prosthetics (to insurance companies). I also hope that it will help to advance prosthetic hands. If the hardware is much less expensive, we can start to focus on the human robot interface. At the moment, it uses electromyographical signals, which sound advanced but are actually 50-year-old technology and don’t give complex functionality like individual finger movement. If the hardware is inexpensive, then money can instead be spent on operations to tap into the nervous system and then the hand can literally be a direct replacement for the human hand. You’ll think about moving your hand and the robotic hand will do exactly what you’re thinking. If done correctly, you’ll also be able to feel with it. We’re talking Luke Skywalker Star Wars tech. It exists now, but is not yet fully tested and proven.

NAN: Prior to venturing out on your own, you were an Applications Engineer at National Instruments (NI). Although you are no longer working for the company, it is backing the Open Hand Project by providing test and measurement equipment. How did NI become involved in the project?

JOEL: National Instruments has been great since I’ve left the company. I explained what I wanted to do, and it was fully supportive. To get the equipment, all I had to do was ask! It really does live up to its reputation of being one of the best places to work. I hope that I’ll be able to repay them with business in the future. If I’m successful, then I’ll be able to buy equipment for future projects.

NAN: Why did you decide to use crowdfunding for this project?

JOEL: I wanted to keep everything open source for this project. Investors don’t want to fund an open-source project. You have no leverage to make money and your ideas will be taken and used by other people (which is encouraged). For this reason, only people who are genuinely interested in the vision of the project will want to invest, and that’s just not something that will make a company money. Crowdfunding is perfect, because people appreciate how this can help people and they’re willing to contribute to that.

I believe that everyone should have access to public health care and that your level of care should not be dependent on the size of your wallet. Making prosthetics open source will be a step in the right direction, but this model does not have to be limited to prosthetics. Take the drugs industry for example. Drugs companies work off patents, they have to patent their drugs in order to make back the millions of dollars they spend developing them and end up charging $1,000 for a pill that costs them $0.01 to make in order to cover all of their costs. If the research was publicly funded and open source, the innovations in this industry would be dramatically accelerated and once drugs were developed, they could be sold more cheaply, if sale of the drugs was government regulated, the price could be controlled and the money could go back into funding more developments.

NAN: What’s next for the Dextrus?

JOEL: There are a few directions I’d like this project to go in. First and foremost is the development of low-cost robotic prostheses for adults. After this, I’d like to look into partial amputations and finger prostheses. I’d also like to try and miniaturize the hand so that children can use it as well. Before any of this can happen I’ll need to reach my crowdfunding goal on indiegogo!