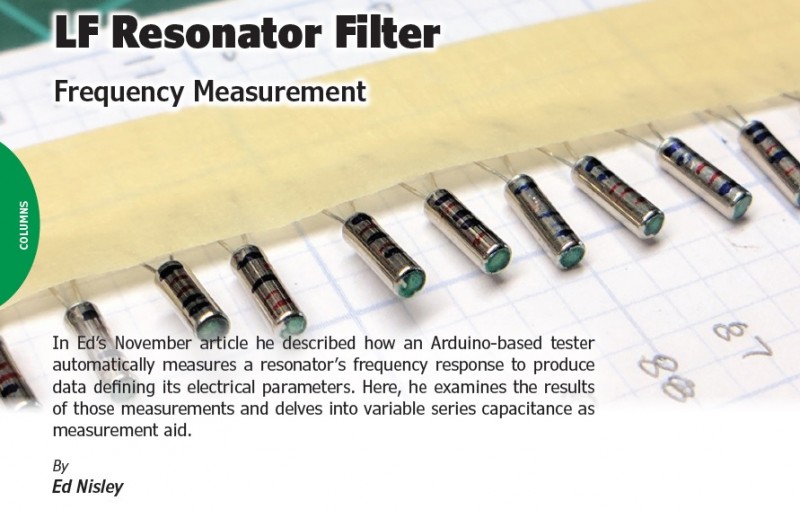 
In Ed’s November article he described how an Arduino-based tester automatically measures a resonator’s frequency response to produce data defining its electrical parameters. Here, he examines the results of those measurements and delves into variable series capacitance as measurement aid.


Quartz resonators—also known as “crystals”—normally set the frequency of a clock oscillator circuit to a precise value, but they can also become filters passing analog signals. Because resonators have an extremely high Q, the filters have a very narrow bandwidth and require precise center-frequency tuning. The Arduino-based tester I described in my November 2017 article (Circuit Cellar 328) automatically measures a resonator’s frequency response to produce the data defining its electrical parameters for use as either an ordinary oscillator or a filter isolating the 60 kHz WWVB signal from the surrounding RF clutter.

In this article, I’ll describe the results of those measurements, explain a tester modification to measure the resonator’s response with a variable series capacitance, then show what a resonator filter does to the 60 kHz WWVB preamplifier’s response.

Over the course of a few months, I bought two lots of 25 quartz tuning fork resonators from eBay, measured all 50 resonators, then converted the data into the histograms in Figure 1. The blue bars show the series resonant frequencies form a reasonably smooth distribution around 59996.1 Hz, 4 Hz below the nominal 60 kHz. A 24 pF series capacitance shifted the resonances upward by 1.7 Hz to produce a similar distribution of the red bars around 59997.8 Hz, showing the resonators behave as expected.

In contrast, refer to the magnetic sensitivity histograms of the Hall effect sensors in my May 2015 article (Circuit Cellar 298). Those eBay parts apparently came from production-line reject bins, because I got only the parts with responses far from their nominal value. My experience suggests you should not expect cheap electronic parts bought from eBay to meet their specifications and you must measure what you get.

The resonator responses cluster below 60.000 kHz, because they’re intended to be built into oscillator circuits with specific values of external capacitances to set the final frequency. For example, most digital oscillators use a Pierce topology with the resonator connected as a feedback element for a CMOS inverter biased into its linear range and a capacitor from each resonator lead to ground. Those oscillators operate near the resonator’s parallel resonance frequency, with the final frequency pulled slightly higher by the load capacitors. …