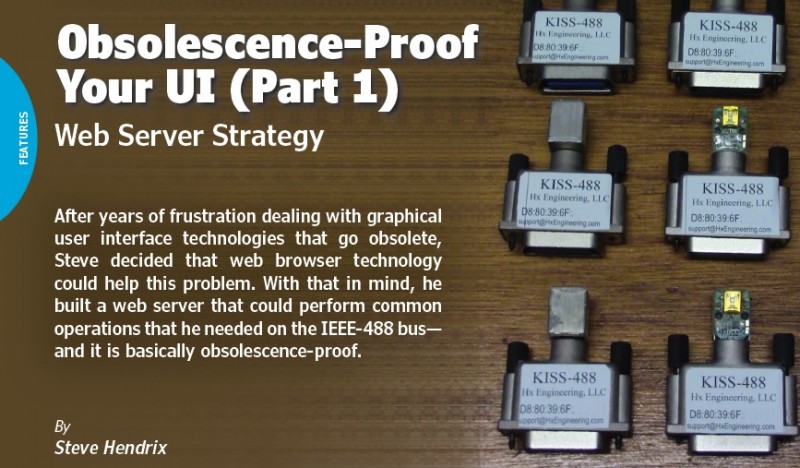 
After years of frustration dealing with graphical user interface technologies that go obsolete, Steve decided that web browser technology could help this problem. With that in mind, he built a web server that could perform common operations that he needed on the IEEE-488 bus—and it is basically obsolescence-proof.


My consulting business is designing custom embedded electronics. Many such systems are size-constrained, but still need some type of user interface. For portable devices, the battery is usually the biggest point of discussion. For wireless designs, it’s the antenna. But for virtually every design, the user interface figures prominently in the concept discussions.

I’ve been involved with one particular design for some 20 years now. When I took it over from the client’s in-house designer, the internal structure was very shaky. Unfortunately, they were not willing to change it due to the re-certification efforts that would be required for a major change. The design’s user interface used a graphic LCD with a touchscreen overlay. I have just completed the latest revision to replace an obsolete part—the latest in a long series of revisions caused by the display panel or the touchscreen going obsolete. This usually happens just about the time the whole product gets through final certification. In this case, we jumped through a lot of hoops to avoid disturbing the core of the product so we wouldn’t require a a big recertification effort. We did so by building a daughterboard that emulates the original touchscreen. A web browser interface would be so much easier!

In a similar vein, I recently purchased a spectrum analyzer to replace a failed unit. The only way to get a screen dump into my PC is via the IEEE-488 bus. That standard is sometimes known as GPIB (General Purpose Interface Bus) or HPIB (Hewlett-Packard Interface Bus). Because this bus has mostly fallen out of favor, instruments that use it are inexpensive. The solutions that purport to interface the IEEE-488 bus to a PC are themselves badly dated. In addition to requiring a cable big enough to flip an instrument off the bench, several other pieces are needed. You need to buy a board that goes inside the PC for four figures, and software to run it for well up into four figures, and hope your PC and operating system are old enough to be compatible. Alternatively, numerous USB interfaces are available. All of those interfaces require a custom driver in your PC, and most of those drivers require older versions of Windows.

Photo 2
(a) A close-up view of the finished unit, which fits comfortably within a standard IEEE-488 connector backshell. This unit is ready for the final application of the label showing its permanently-assigned MAC address. (b) A peek under the hood, showing the microcontroller, the IEEE-488 bus termination resistor packs, and most of the power supply. The mini-USB connector makes no data connection, but only provides power to the unit. Such power supplies have become such ubiquitous commodity products that they are the most cost-effective way to get 5 V power to the unit.Many years ago, I worked for a company who specialized in IEEE-488 interfaces. Although I’d forgotten some of the nuances that make it such a pain to work with directly, I remembered enough to know that the Microchip PIC18F97J60 microcontroller could directly drive the bus lines for a single instrument. The PIC would need buffering to deal with the full 14 instruments that can be on the bus per the specification, but I just wanted to interface a single instrument. Best of all, I already had experience with building a web server in this chip from my solar power controller discussed in the July 2014 and August 2014 issues (Circuit Cellar 288 and Circuit Cellar 289.) The microcontroller and all required electronics could fit inside the backshell of a standard IEEE-488 connector. The lead article photo (Photo 1) shows the very tidy end result—note the MAC addresses printed on each label. Photo 2 shows a close-up view of the exterior and interior.

I’m sure that HTTP and web browsers will someday go the way of buggy whips. However, given their use today in everything from PCs to laptops to tablets to smart phones, I’m thinking web browsers are likely to be around for a while. With that in mind, I chose to build a web server that could perform common operations that I need on the IEEE-488 bus, and ultimately built it into a product available for sale to others with similar needs. By using a web browse the user interface, the device is accessible via anything from a desktop computer to an iPod—and it’s pretty much obsolescence -proof, at least within my lifetime! …

Author′s Note: I offer a special discount on KISS-488 to Circuit Cellar readers. Contact me at SteveHx@HxEngineering.com for details!