Musical instruments such as the piano allow musicians to play in different keys on a single instrument. In contrast, bamboo flutes are designed for only one key. This means flute players must own a different flute for every additional key in which they want to play in. Learn how these three Cornell students built an PIC32 MCU-based electronic flute that reduces the need for owning multiple flutes by incorporating two buttons that allow a flute player to change the key and octave.

Our goal for this project was to build an electronic flute that can play in any key. The first step in this project was understanding the design of a bamboo flute, which differs greatly from Western concert flutes. A typical bamboo flute can be played in only one key. It has a total of seven holes, six of which are used to play different notes. The seventh hole is for the inlet of wind (the player’s breath). The strength of air blown into it determines the octave of the note.

If the strength of the air blown exceeds a certain threshold, the flute produces sound in a higher octave. Otherwise, the flute produces sound in a lower octave. The arrangement of the player’s fingers over the six holes distinguishes the different notes. Whether a hole is open, half-covered or fully covered by a finger also differentiates the note being played. For example, if a fully covered hole generates a note C major key, the half-covered hole generates a note in C minor key.

Our electronic flute, shown in Figure 1, is built to be comparable in size, design and spectral dynamics to a typical bamboo flute. We simulated the six finger holes of a typical flute using capacitive touch sensors. A seventh hole holds the microphone and simulates a flute’s blow hole. Physically, these switches are pieces of copper tape connected to wires. We used a total of 13 capacitive touch sensors—two for each hole and one for the “chin sensor.” The chin sensor determines when someone is playing the flute. It is positioned directly under the microphone hole, and needs to be touched when playing. The microphone detects if air is blown into the flute, indicating that a sound should be produced. Note that the words button, switch and sensor used throughout this article functionally refer the same general mechanism. 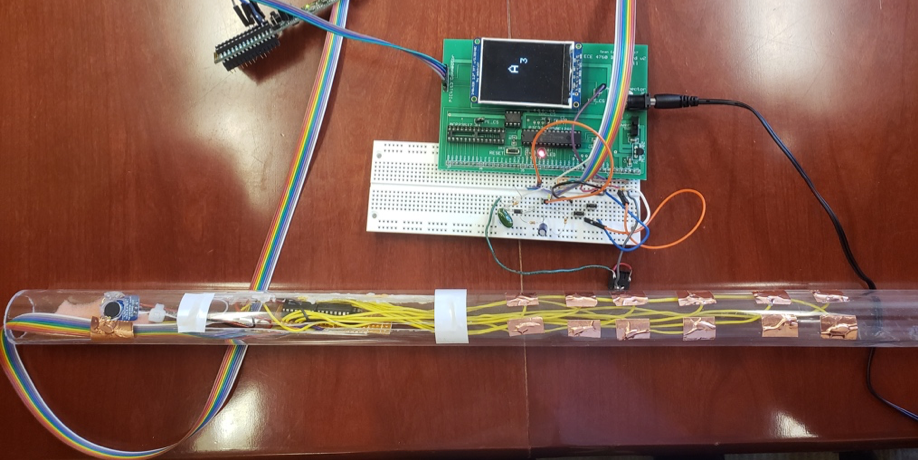 At the heart of our electronic flute is a PIC32 microcontroller (MCU) from Microchip Technology, which reads the inputs from the copper tape buttons and microphone to produce the correct notes and sound. The sound is outputted to a speaker after going through a digital-to-analog converter (DAC).

A detailed breakdown of the hardware components of our electronic flute is shown in the block diagram in Figure 2. The 13 copper-tape touch sensors, the microphone, the key control switch and the octave control switch are inputs into the PIC32 MCU. The outputs from the PIC32, after running direct digital synthesis, are sent through the DAC to the amplified speaker to produce the flute sounds. Two buttons are used to control the key and octave of the flute, which get displayed on the TFT Display.

One unique feature on the PIC32 is the Charge Time Measurement Unit (CTMU). Our first step when designing our electronic flute was determining how to use the CTMU to create the capacitive touch sensors. The CTMU peripheral is available for use on all the ADC pins of the MCU. It is essentially a settable current source that can measure resistance, capacitance and more. To understand how we used a settable current source to measure capacitance, recall that the formula for capacitance is C = q/V, where C is the capacitance, V is the voltage across the capacitor and q is the charge. Charge can also be denoted as the product of the current (I) and time (t). Hence, the formula can be rewritten as C = (I × t) / V. Using the CTMU, if the pin is provided with a fixed current for a fixed amount of time, we get C as inversely proportional to V. This logic is used to measure the voltage on an ADC pin, which changes when the pin is touched and released. This is how CTMU can be used to create touch sensors.

The PIC32 does not provide enough ADC channels for the 13 touch sensors in our design, so we chose to connect the touch sensors to two analog multiplexers (Figure 2). …

Video of the Electronic Flute project: