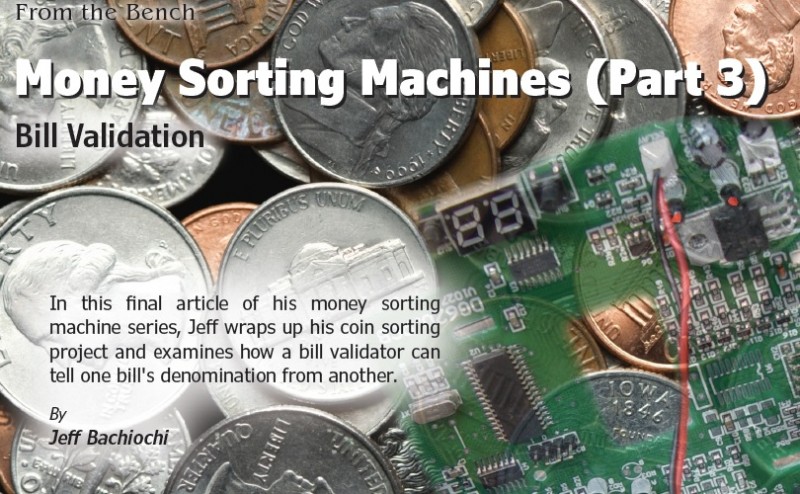 
In this final article of his money sorting machine series, Jeff wraps up his coin sorting project and examines how a bill validator can tell one bill’s denomination from another.


Most of us connect Ben Franklin with kites and lightning. He was also a printer and might be best known for Poor Richard’s Almanack—a yearly publication that he published from 1732 to 1758 under the pseudonym of Richard Saunders. It was a best-seller and thanks to his wit and wisdom, his portrait was added to the cover of The Old Farmer’s Almanac in 1851—appearing opposite the founder Robert B. Thomas. It remains there today.

As a master printer and engraver, in 1730 Franklin began printing all paper money issued by Pennsylvania, New Jersey and Delaware. Paper money was first introduced in the region in 1723, but it remained a hot political issue. That’s because it helped farmers and tradesmen, while merchants and landowners wanted it eliminated or limited in its circulation. Paper money printed from ordinary type was easy to counterfeit, but Ben’s ingenuity solved that problem by printing pictures of leaves on every piece of money. Counterfeiters could not duplicate—or even imitate—the fine lines and irregular patterns. The process by which he made the printing plates was secret, but were probably cast in type metal from molds made by pressing leaves into plaster of Paris. There began the Feds vigilant effort to thwart counterfeiters.

Today every aspect of our paper currency is controlled—from its design to its printing, as well as its monitoring and destruction. The paper (which is not paper) and ink (multiple types and formulas) are fabricated for the express use by the Department of Engraving. That department is the Treasury bureau responsible for paper money—as opposed to the U.S Mint, which is the Treasury bureau responsible for coinage. US currency consists of 25% linen and 75% cotton and contains small randomly disbursed red and blue security fibers embedded throughout the material. Depending on the denomination the material is further enhanced by embedding security threads, ribbons and watermarks. Since 1996, printing with colored and color changing inks make the new currency pop. While older black and green currency is rather drab in comparison, it is still legal tender and remains the target of most counterfeiters.

The previous two parts of this article series (December 329 and January 330) centered around coinage. Before we look at bill validation for paper money, I need to finish up with that project. I had purchased a few Coin Acceptors and showed how they are used to identify coinage, especially but not limited to US coins. The acceptance and dispensing of money is presently used in many ways today, including vending machines and ATMs. The discussion also included National Automatic Merchandising Association (NAMA), the organization that developed the international specification for the Multi-Drop Bus/ Internal Communication Protocol (MDB/CP) released in July 2010. The MDB/ICP enables communication between a master controller and any of the peripheral hardware like Coin Acceptors and bill validators. By adhering to these guidelines, any manufacturer’s equipment is interchangeable.