Home » IoT: From Gateway to Cloud 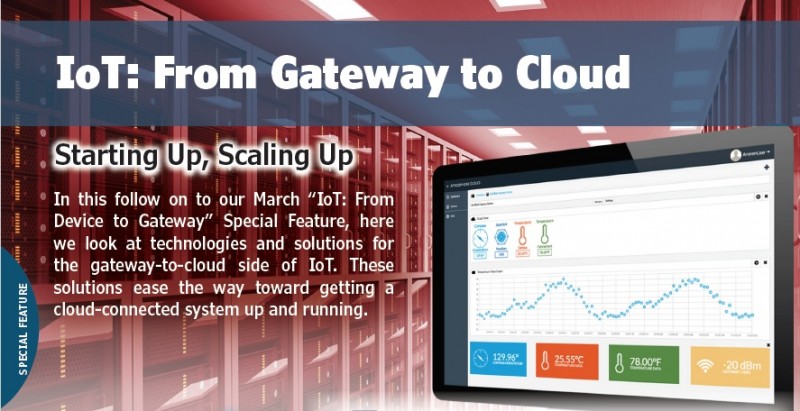 Starting Up, Scaling Up


In this follow on to our March “IoT: From Device to Gateway” Special Feature, here we look at technologies and solutions for the gateway-to-cloud side of IoT. These solutions ease the way toward getting a cloud-connected system up and running.


After exploring the edge device side of the Internet-of-Things (IoT) last month, now we’ll look at cloud side the equation. Even though the idea of Internet-linked embedded devices has been around for decades, multiple converging technology trends have brought us to the IoT phenomenon of today. The proliferation of low cost wireless technology has coincided with significant decrease in the costs of computing, data storage and sensor components. Meanwhile, that same computing and storage are now widely available as cloud-based platforms that can scale linearly.

Much attention has been focused on the size of the growing IoT market in terms of revenue and number of devices. But another interesting metric is the number of IoT developers working on IoT-based systems. According to analysts, that number will approach 10 million within the next few years and a lot of that growth will be among smaller firms starting from the ground up or adding IoT to their infrastructure for the first time. For those smaller organizations the process of getting started with cloud-connected infrastructure can be a hurdle. And even after that step, there’s the issue of scaling up as the need arises to expand their IoT implementation.

Feeding both those needs, a number of companies ranging from IoT specialists to embedded software vendors to microcontroller vendors have over the past six months, rolled out a variety of solutions to help developers get started with their cloud-connected IoT system and scale that system to larger numbers of IoT edge nodes and increased cloud-based service functionality.

IoT for the Masses

With both those trends in mind, Atmosphere IoT positions itself as focused on the mass market of IoT developers. Formerly part of Anaren, Atmosphere IoT Corp. was previously Anaren’s IoT Group before Anaren divested that division in January into the newly formed Atmosphere IoT Corp. For its Atmosphere IDE product, the company provides an interesting business model. Atmosphere IDE is available for free—anyone can log on and use it. Once you get over 5 connected things and want to have Atmosphere IoT store more data and manage more things, you start paying incrementally. The idea is to make it easy for developers to generate code and get prototype systems and a limited pilot program up and running. When users are ready to scale up or when they find commercial success, they can scale linearly because all of Atmosphere’s software is built on the Amazon Web Services (AWS) cloud. 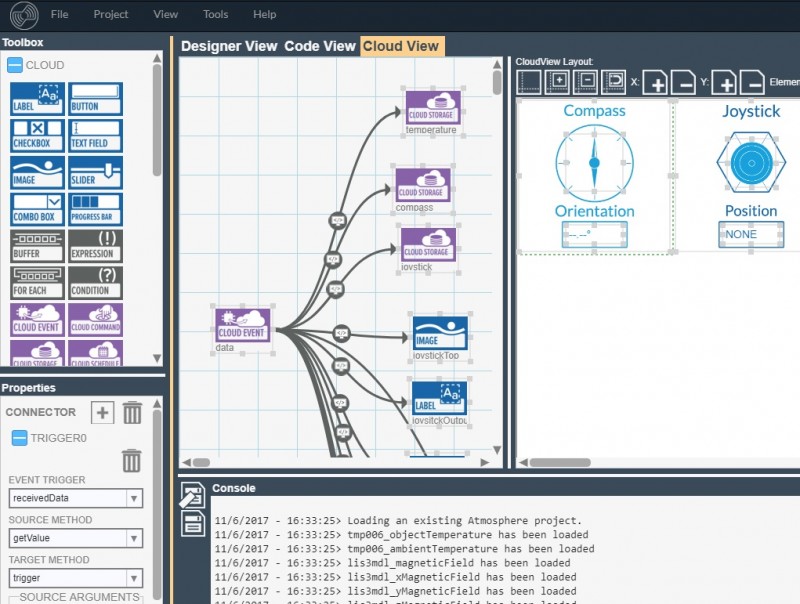 Photo 1
The Cloud View part of Atmosphere IDE lets developers use cloud elements to quickly connect their projects to Atmosphere Cloud, sending data from an embedded system to the cloud for a cohesive sensor-to-cloud solution.

Using the IDE, developers can create either Wi-Fi or Bluetooth Smart projects and choose between supported platforms including Anaren hardware and the Intel Curie module. On the cloud development side, the Atmosphere IDE provides easy cloud connectivity access, connecting IoT devices to the cloud application to take advantage of data hosting, analysis, reporting, real-time monitoring and much more. The Cloud View (Photo 1) part of the IDE lets developers use cloud elements to quickly connect their projects to Atmosphere Cloud, sending data from an embedded system to the cloud for a cohesive sensor-to-cloud solution.

IoT: From Gateway to Cloud