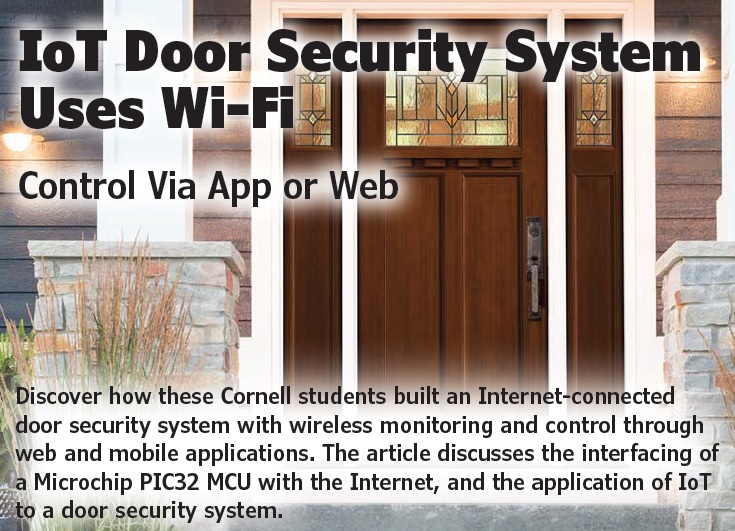 Control Via App or Web

The idea for an Internet of Things (IoT) door security system came from our desire to grant people remote access to and control over their security system. Connecting the system with the Internet not only improves safety by enabling users to monitor a given entryway remotely, but also allows the system to transmit information about the traffic of the door to the Internet. With these motivations, we designed our system using a Microchip Technology PIC32 microcontroller (MCU) and an Espressif ESP8266 Wi-Fi module to interface a door sensor with the Internet, which gives the user full control over the system via mobile and web applications.

The entire system works in the following way. To start, the PIC32 tells the Wi-Fi module to establish a connection to a TCP socket, which provides fast and reliable communication with the security system’s web server. Once a connection has been established, the PIC32 enters a loop to analyze the distance sensor reading to detect motion in the door. Upon any detection of motion, the PIC32 commands the Wi-Fi module to signal the event to the web server. Each motion detection is saved in memory, and simultaneously the data are sent to the website, which graphs the number of motion detections per unit time. If the security system was armed at the time of motion detection, then the PIC32 will sound the alarm via a piezoelectric speaker from CUI. The alarm system is disarmed at default, so each motion detection is logged in the web application but no sound is played. From both the web and mobile application, the user can arm, disarm and sound the alarm immediately in the case of an emergency.

The PIC32 acts as the hub of the whole system. As shown in Figure 1, each piece of hardware is connected to the MCU, as it detects motion by analyzing distance sensor readings, generates sound for the piezoelectric speaker and commands the Wi-Fi module for actions that pertain to the web server. The distance sensor used in our system is rated to accurately measure distances of only 10 to 80 cm [1]. That’s because motion detection requires us only to measure large changes in distances instead of exact distances, the sensor was sufficient for our needs.

Figure 1
The schematic of the security system. Note that the door sensor runs on 5  V, whereas the rest of the components run on 3.3 V

In our design, the sensor is facing down from the top of the doorway, so the nearest object to the sensor is the floor at idle times, when there is no movement through the door. For an average height of a door, about 200 cm, the sensor outputs a miniscule amount of voltage of less than 0.5 V. If a human of average height, about 160 cm, passes through the doorway, then according to the datasheet [1], the distance sensor will output a sudden spike of about 1.5 V. The code on the PIC32 constantly analyzes the distance sensor readings for such spikes, and interprets an increase and subsequent decrease in voltage as motion through the door. The alarm sound is generated by having the PIC32 repeatedly output a 1,500 Hz wave to the piezoelectric speaker through a DAC. We used the DMA feature on the PIC32 for playing the alarm sound, to allow the MCU to signal the alarm without using an interrupt-service-routine. The alarm sound output therefore, did not interfere with motion detection and receiving commands from the web server.

The Wi-Fi module we used to connect the PIC32 to the Internet is the ESP8266, which has several variations on the market. We chose model number ESP8266-01 for its low cost and small form factor. This model was not breadboard-compatible, but we designed a mount for the device so that it could be plugged into the breadboard without the need for header wires. Figure 2 shows how the device is attached to the breadboard, along with how the rest of the system is connected. 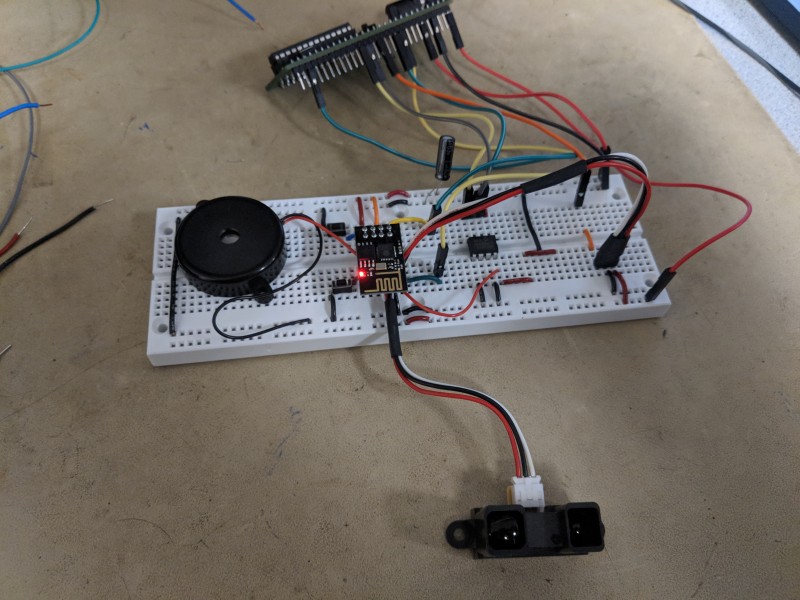 Figure 2
The full system is wired up on a breadboard. The door sensor is at the bottom of the photo, and is attached facing down from the top of a doorway when in use. The device at the top of the figure is the PIC32 MCU mounted on a development board.

Before interfacing the PIC32 with the Wi-Fi module, we used a USB-to-TTL serial cable to connect the module to a computer, and tested the functionality of its AT commands by sending it commands from a serial terminal. …