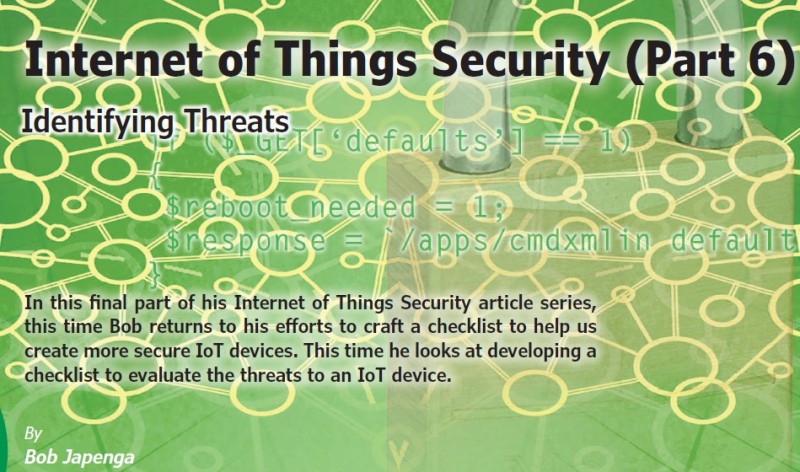 In this final part of his Internet of Things Security article series, this time Bob returns to his efforts to craft a checklist to help us create more secure IoT devices. This time he looks at developing a checklist to evaluate the threats to an IoT device.

A number of years ago (there were woolly mammoths around if I remember correctly), I attended a conference on the Ada programming language. Ada was created for the United States’ Department of Defense to replace the myriad of programming languages that were deployed by the DoD at that time. The language was named after the first programmer, Augusta Ada King Lovelace, a colorful character in her own right and the only legitimate daughter of the poet Lord Byron. Ada is credited with publishing the first algorithm for use on a computing machine: Charles Babbage’s famous analytical engine.

At the conference I attended a breakout session on algorithms. In the conference room next door, a popular speaker, whose name I don’t remember, held another breakout session. About ten minutes into the session, we heard a deafening chant coming from the conference room next door that repeated over and over: “I don’t care.” The speaker was making a point that, as software designers, we should not care about everything. There are legitimate things for which we need to say: “I don’t care.” We need to identify them as not relevant to the task at hand and emphatically say: “I don’t care.”
Although I remember nothing from the breakout session on algorithms, I have never forgotten this principle: “There are some things that we just don’t care to address when designing embedded systems.” Certainly, there is much to be said for thoroughness in design, but when we—with well thought through analysis—determine that some aspect of a design is a “don’t care” we need to let it go.

In designing secure IoT devices this is a very important principle. The threats are diverse and difficult to number. The assets are important and of differing value. This month we will continue to build our checklist for IoT security. Last time we created a checklist to help you identify the assets that you want to protect. This month we will add to that checklist with some questions to help you identify and quantify the threats.

We need to start with definitions. A good working definition for a threat would be: “a person or thing likely to cause damage or danger.” Although this is a good definition, for the purpose of building our checklist, I want to expand upon it a little. Here’s why: In most cases “I don’t care” who the threat is, nor do I care what their capabilities are. Keep in mind that, if there is a threat with very little capabilities, that threat could get passed on. They can always sell either their knowledge or their access to the device to someone who has the capabilities to create a security breach with the device. Let me illustrate that. Imagine there are two threats: One is a disgruntled former employee with little or no capability of reverse engineering your design in order to find a security flaw. The second is an organization with deep pockets and highly skilled hackers. If any of the assets that we identified in the first part of the checklist are worth a significant chunk of change, the former employee can always sell what they have to this other organization. With all that in mind, in general “I don’t care” about who the threat is.

But I do care about the activities of these threat agents. This is in line with the way the OWASP Top Ten IoT Security Threats is laid out. The Open Web Application Security Project (OWASP) is a worldwide organization focused on improving the security of software. I introduced OWASP as a valuable resource in my August 2016 column (Circuit Cellar 313) when we discussed their list of the top ten security vulnerabilities. The list was updated in 2017 and worthwhile to review [1]. OWASP also provides what its calls the top ten threats to IoT devices. We will look at these a little later in this article. They agree with my assessment that we don’t care who it is or what their capability is. What we care about is the action that they can take. 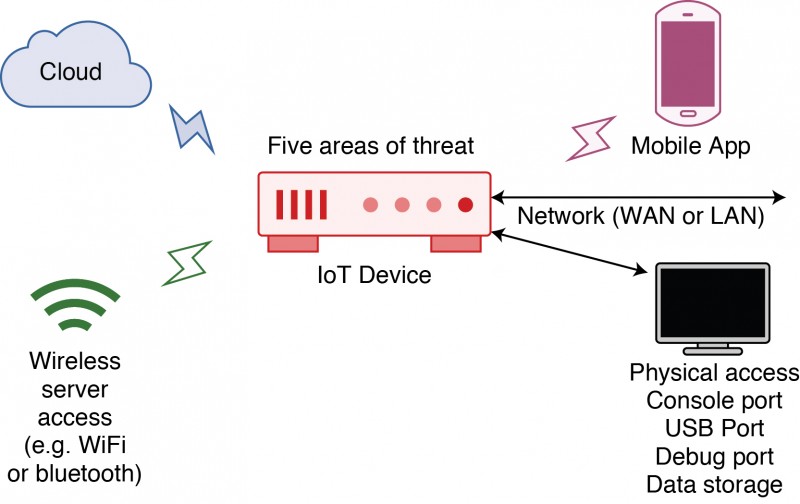 This provides the first five elements of the Threat portion of the IoT Security Checklist. Let’s look at each of these.

Physical access: Not all IoT device designers will consider physical access to the device an area of threat. For example, we are currently working with a client who has determined that there is very little risk of an unauthorized person having physical access to their device. For most cases this is true. The device is only touched by employees and is physically inaccessible to everyone else. But I have not pushed them to protect the assets accessible through physical access for other reasons. I have gone along with that assessment because the assets available inside the device are minimal. But if the assets were valued higher, I would push back more strongly primarily due to the potential of a disgruntled or greedy insider handing the unit off to a qualified hacker. 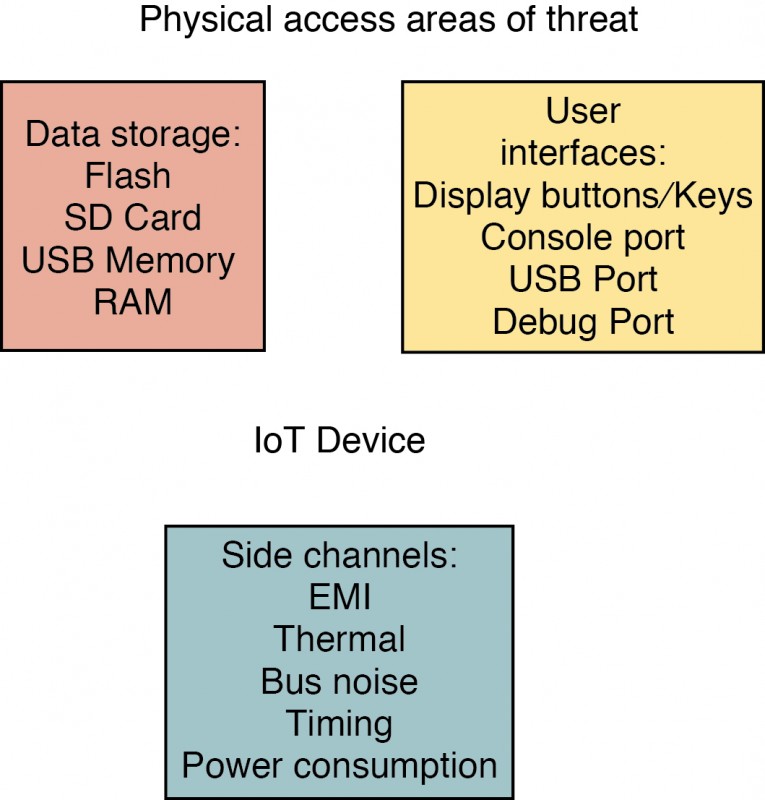 Figure 2
Shown here are the access areas of threat if physical access is a threat area for your device.

Mobile app: Many of our IoT devices have a mobile app associated with it. Although not strictly part of the IoT, it is certainly something that needs to be considered when designing your IoT device. Certainly, one approach is to limit who can put your mobile app on their phone or tablet. This certainly provides a great physical barrier to access. But the integration of Google’s Play Store and Apple’s App Store with your phone and tablet makes for very easy deployment and is very tempting to us designers. Surely the next line of defense is to drastically limit what the mobile app can access. Again, this is the power of the mobile app interface and you hate to lose it. Requiring a username and strong password is your next line of defense. For now, our job is to identify what harm someone bent on destroying your business would do if they were given unlimited access to your mobile app. How your mobile app communicates to the device is another concern we’ll look at next.

Wireless access: Your IoT device may provide several wireless ways to connect to it: cellular, Wi-Fi, Zigbee, Thread, Bluetooth, IrDA and Near Field Communication (NFC) are some of the most common. At this point in our checklist we need to ask: What if an unauthorized person got on your device wirelessly? What harm could be done? What if someone could perform a man-in-the-middle attack? The most recent Bluetooth hacking technique [2] shows us that even secure transmissions can have holes in their implementations allowing for man-in-the-middle attacks. So, we cannot just rely on secure transmissions as our only source of protection. I think about this every time I connect over Bluetooth to my OBD2 (on-board diagnostics) interface in my car. What would happen if someone could get on that interface and muck with my on-board computer? There’s no doubt that providing good access control through usernames and passwords, encrypting and authenticating all traffic and limiting physical access are all in your arsenal of protection. For now, we are concentrating on evaluating the harm nefarious access over the wireless interfaces on your IoT device could do.

Cloud access: Like mobile access, your cloud access is not strictly part of the IoT device. But again, we must pursue the questions: What if an unauthorized person got on your cloud interface? What harm could be done? The cost of that harm will help you to evaluate the amount of security you need to provide to the cloud interface. Clearly, we don’t want to use unencrypted transmissions. HTTPS provides encryption for us. But we found that on one of our major projects the cell modem chip only supported HTTP. So, we needed to encrypt the transmissions ourselves. Secure user access is pretty standard for cloud interfaces. But again, don’t rely on these layers. Seriously address what harm a malicious hacker intent on destroying your company could do if they had full access to your IoT cloud interface.

IoT network: Some of our IoT devices still have an Ethernet interface and provide some form of local area networking (LAN) or wide area networking (WAN). But this could be any wired network interface. Again, we need to look hard at what someone could gain from watching the traffic on the network. Our company’s most serious security breach came because of a little used Ethernet port that provided unencrypted traffic to a Link Local address. A researcher sniffed it out and found a security flaw. …