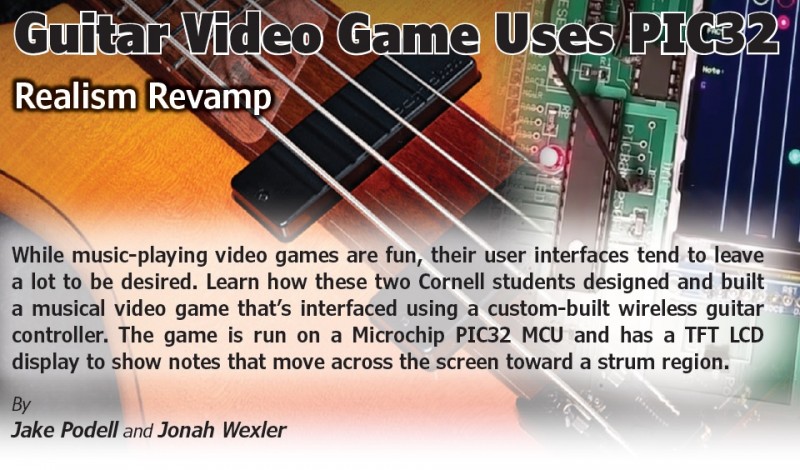 While music-playing video games are fun, their user interfaces tend to leave a lot to be desired. Learn how these two Cornell students designed and built a musical video game that’s interfaced using a custom-built wireless guitar controller. The game is run on a Microchip PIC32 MCU and has a TFT LCD display to show notes that move across the screen toward a strum region.

By Jake Podell and Jonah Wexler

While many popular video games involve playing a musical instrument, the controllers used by the player are not the greatest. These controllers are often made of cheap plastic, and poorly reflect the feeling of playing the real instrument. We have created a fun and competitive musical video game, which is interfaced with using a custom-built wireless guitar controller (Figure 1 and Figure 2). The motivation for the project was to experiment with video game interfaces that simulate the real-world objects that inspired them. 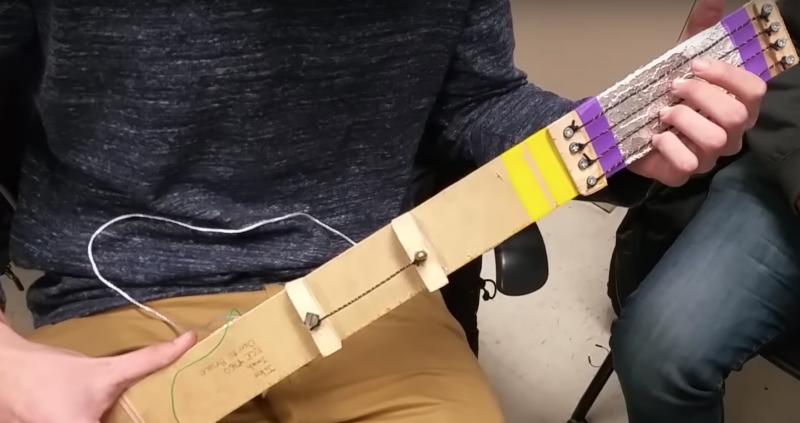 Figure 1
Front of the guitar controller. Note the strings and plectrum. 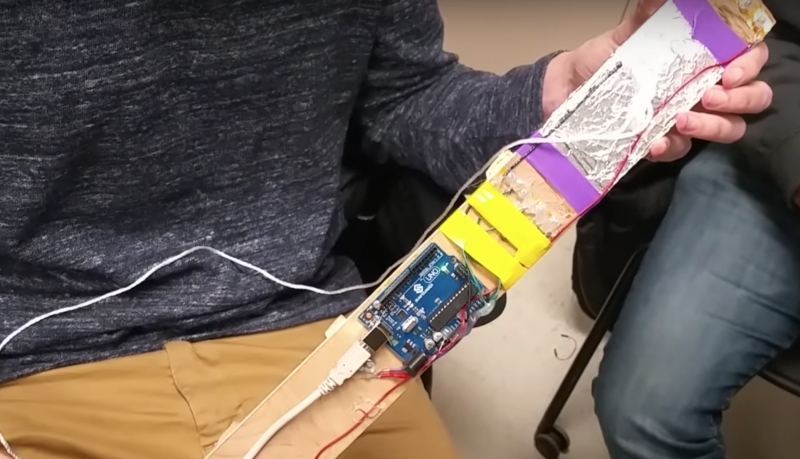 Figure 2
Back of the guitar controller

The video game is run on a Microchip PIC32 microcontroller [1]. We use a thin-film-transistor LCD display (TFT) to display notes that move across the screen toward a strum region. The user plays notes on a wireless mock guitar, which is built with carbon-impregnated elastic as strings and a conducting plectrum for the guitar pick. The game program running on the PIC32 produces guitar plucks and undertones of the song, while keeping track of the user’s score. The guitar is connected to an Arduino Uno and Bluetooth control center, which communicates wirelessly to the PIC32.

The controller was designed to simulate the natural motion of playing a guitar as closely as possible. We broke down that motion on a real guitar into two parts. First, users select the sound they want to play by holding the appropriate strings down. Second, the users play the sound by strumming the strings. To have a controller that resembled a real guitar, we wanted to abide by those two intuitive motions.

At the top of the guitar controller is the fret board. This is where the users can select the sounds they want to play. Throughout the system, the sound is represented as a nibble (4 bits), so we use 4 strings to select the sound.

Each string works as an active-low push-button. The strings are made of carbon-impregnated elastic, which feels and moves like elastic but is also conductive. Each string was wrapped in 30-gauge copper wire, to ensure solid contact with any conductive surfaces. The strings are each connected to screws that run through the fret board and connect the strings to the fret circuit (Figure 3). 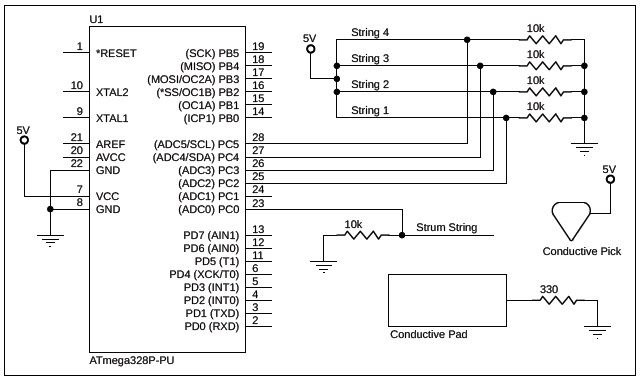 The purpose of the fret circuit is to detect changes in voltage across four lines. Each line is branched off a power rail and connected across a string to an input pin on an Arduino Uno. Current runs from the power rail across each string to its respective input pin, which reads a HIGH signal. To detect a push on the string, we grounded the surface into which the string is pushed. By wrapping the fret board in a grounded conductive pad and pushing the string into the fret board, we are able to ground our signal before it can reach the input pin. When this occurs, the associated pin reads a LOW signal, which is interpreted as a press of the string by our system.

Along with the fret circuit, we needed a way to detect strums. The strum circuit is similar in its use of a copper-wrapped, carbon-impregnated elastic string. The string is connected through the fret board to an input pin on the Arduino, but is not powered. Without any external contact, the pin reads LOW. When voltage is applied to the string, the pin reads HIGH, detecting the strum. To mimic the strumming motion most accurately, we used a guitar pick to apply the voltage to the string. The pick is wrapped in a conductive material (aluminum foil), which is connected to the power rail. Contact of the pick applies voltage to the string, which on a rising edge denotes a strum.

Figure 4
Shown here is a block diagram of the controller signals.

As shown in Figure 4, the direct user interface for the player is the guitar controller. The physical interaction with the guitar is converted to an encoded signal by an Arduino mounted to the back of the guitar. The Arduino Uno polls for a signal that denotes a strum, and then reads the strum pattern across the four strings. The signal is sent over USB serial to a Bluetooth control station, which uses a Python script to broadcast the signal to an Adafruit Bluetooth LE module. The laptop that we used as a Bluetooth control station established a link between the controller and the Bluetooth receiver, and was paramount to the debugging and testing of our system. Finally, the Bluetooth module communicated over UART with the PIC, which interpreted the user’s signal in the context of the game [2].  …