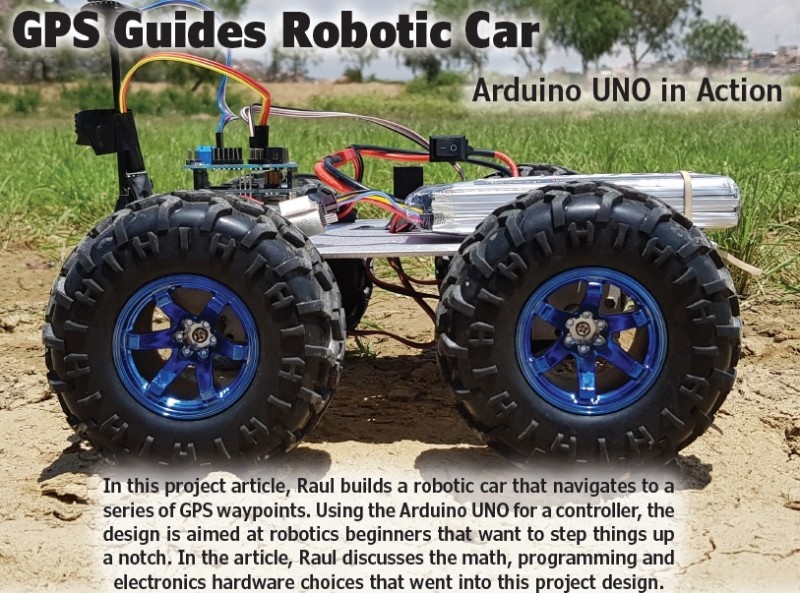 In this project article, Raul builds a robotic car that navigates to a series of GPS waypoints. Using the Arduino UNO for a controller, the design is aimed at robotics beginners that want to step things up a notch. In the article, Raul discusses the math, programming and electronics hardware choices that went into this project design.

In this article I lay out a basic differential drive robotic car for waypoint autonomous navigation using the Global Positioning System (GPS). The robotic car receives a list of GPS coordinates, and navigates to waypoints in their given order. To understand how it works, I will discuss concepts about GPS, a simple approach to implement autonomous navigation using GPS, the hardware required for the task, how to calculate navigation vectors using the “Haversine Formula” and the “Forward Azimuth Formula” and a simple implementation of a moving average filter for filtering the GPS coordinate readings. I also discuss a simple approach to navigation control by minimizing the robotic car’s distance and heading error with respect to the goal.

This project is aimed at beginners with basic robotic car experience—that is, line followers, ultrasonic obstacle avoiders and others who now want to try something a little more complex—or anyone who is interested in the subject.

Figure 1 shows the main components of the system. The GPS receiver helps to calculate the distance from the robotic car to the goal. With the aid of a digital compass, the GPS also helps to determine in which direction the goal is located. Those two parameters—distance and direction—give us the navigation vector required to control the robotic car toward the goal. I used a four-wheel differential drive configuration for the car, which behaves almost the same as a two-wheel differential drive. The code provided with the project should work well with both configurations.

To calculate the distance to the goal, I used the Haversine Formula, which gives great-circle distances between two points on a sphere from their longitudes and latitudes. The Forward Azimuth Formula was used to calculate the direction or heading. This formula is for the initial bearing which, if followed in a straight line along a great-circle arc, will take you from the start point to the end point. Both parameters can be calculated using the following known data: The goal’s GPS coordinate, the robotic car’s coordinate obtained from the GPS receiver and the car’s heading with respect to North obtained from the digital compass.

The robotic car constantly recalculates the navigation vector and uses the obtained distance and heading to control the motors to approach the goal. I also put a buzzer in the robotic car to give audible feedback when the robotic car reaches the waypoints.

As shown in Figure 1, I used an Arduino UNO board as the main controller. I chose Arduino because it’s incredibly intuitive for beginners, and it has an enormous constellation of libraries. The libraries make it easy to pull off reasonably advanced projects, without excessive details about the hardware and software drivers for sensors and actuators.

The GPS receiver I chose for the task is the HiLetgo GY-GPS6MV2 module, based on the U-blox NEO-6M chip. The digital compass is the GY-271 module, based on the Honeywell HMC5883L chip. Both are low-cost and ubiquitous with readily available Arduino libraries. The U-blox NEO-6M has a UART serial communication interface, and the HMC5883L works with the I2C serial protocol. To avoid interference, the compass should be placed at least 15 cm above the rest of the electronics.

The DC motors are driven using the very popular L298N module, based on the STMicroelectronics L298N dual, full-bridge driver. It can drive two DC motors with a max current of 2 A per channel. It can also drive two DC motors in each channel if the max current specification is not surpassed—which is what I’m doing with the four-wheel drive chassis I used for my prototype. The chassis has a 30 cm × 20 cm aluminum platform, four generic 12 V DC 85 rpm motors and wheels that are 13 cm in diameter. But almost any generic two-wheel or four-wheel drive chassis can be used.

For supplying power to the robotic car, I used an 11.1 V, 2,200 mA-hour (LiPo) Lithium-Polymer battery with a discharge rate of 25C. For my type of chassis, a battery half that size should also work fine. Figure 2 shows the circuit diagram for this project, and Figure 3 shows the finished car.

The Global Positioning System (GPS) is a global navigation satellite system owned by the United States government. It provides geolocation and time information to any GPS receiver on the surface of the Earth, whenever it has unobstructed line of sight to at least four GPS satellites—the more the better [1]. GPS receivers typically can provide latitude and longitude coordinates with an accuracy of about 2.5 m to 5 m under ideal conditions, such as good sky visibility and lots of visible satellites. My robotic car is programmed with one or more waypoints given by latitude and longitude coordinates, and the car’s GPS receiver gives its actual position in the same type of coordinates.  …