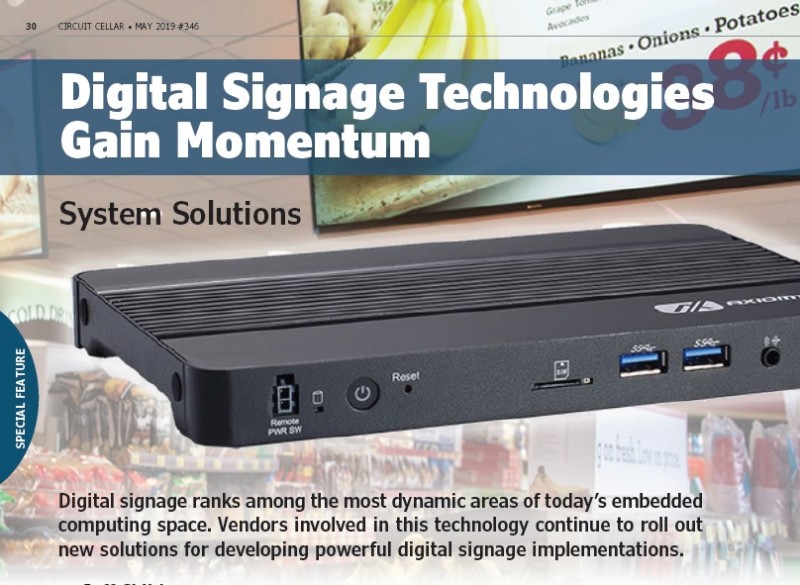 Digital signage ranks among the most dynamic areas of today’s embedded computing space. Vendors involved in this technology continue to roll out new solutions for developing powerful digital signage implementations.

Digital signage is one of those technologies that seemed to breeze into our modern society so quickly and smoothly that it’s hard to image life without it. Today’s technologies provide users with the ability to easily update information on large, high-resolution displays in real-time and in rugged, outdoor environments. And the ability to rotate ads even on billboard-sized displays has multiplied revenue streams for stakeholders using digital signage systems. 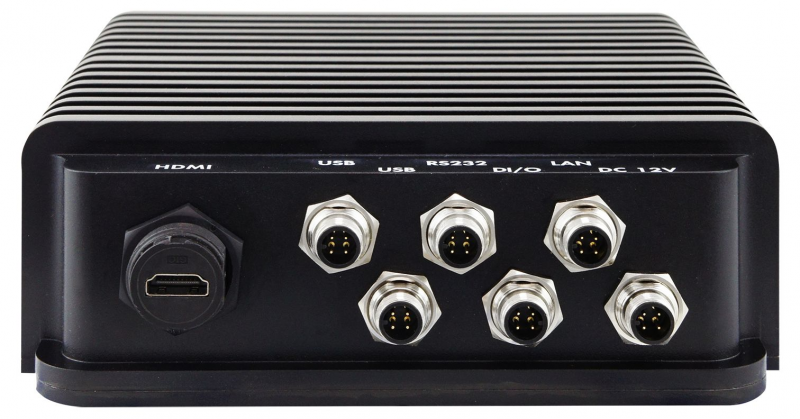 Figure 1
The SW-101-N is a waterproof, fanless signage player that is integrated with a 1.91 GHz Intel Atom Processor E3845 Quad-Core Processor and Intel HD graphics (Gen 7-LP) 4EU. The SW-101-N is built to withstand dust, water and extreme temperatures in mind.

The SW-101-N meets IP68 standards, allowing it to handle submersion in water for up to 30 minutes at a depth of 1.5 meters. The black-color waterproof enclosure uses a C3 HDMI connector and M12 I/O interface connectors for two USB 2.0, one Gbit LAN, one RS-232, DC power input and digital I/O. Two antenna N-jack type connectors have waterproof designs as well. Aside from being fanless, the unit has a wide operating temperature range of -40°C to 75°C.

A powerful set of digital signage functionality can be squeezed into a very small form factor these days. In an example along those lines, in September Advantech introduced its USM-110, an ultra-compact digital signage player. This fanless system provides support for Android 6.0 and Advantech’s own WISE-PaaS/SignageCMS digital signage management software. The compact (156 mm x 110 m x 27 mm) device follows earlier Advantech signage computers such as the slim-height, Intel Skylake based DS-081.

The USM-110, which is also available in a less feature rich USM-110 Delight model, ships with 2 GB DDR3L-1333, as well as a microSD slot. It has 16 GB of eMMC on the standard version and 8 GB on the Delight. There’s also a GbE port and an M.2 slot with support for an optional Wi-Fi module with antenna kit.

The USM-110 has two HDMI ports, both with locking ports: an HDMI 2.0 port with H.265-encoded, native 4K at 60 Hz (3840 x 2160) and a 1.4 port with 1080p resolution. The system enables dual simultaneous HD displays. The Delight version lacks the 4K-ready HDMI port, as well as the standard model’s mini-PCIe slot, which is available with an optional 4G module with antenna kit. The Delight is also missing the standard version’s RS232/485/422 port, and it has only one USB 2.0 host port instead of four. Otherwise, the two models are the same, with a micro-USB OTG port, audio jack, reset, dual LEDs and a 12V/3A DC input. The 0.43 kg system has a 0 to 40°C range, and offers VESA, wall, desktop, pole, magnet and DIN-rail mounting (Figure 2). 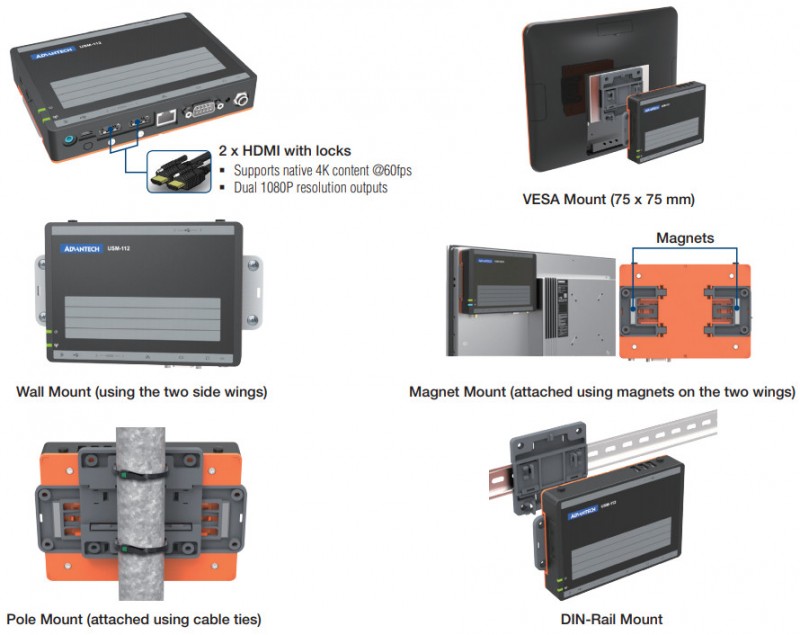 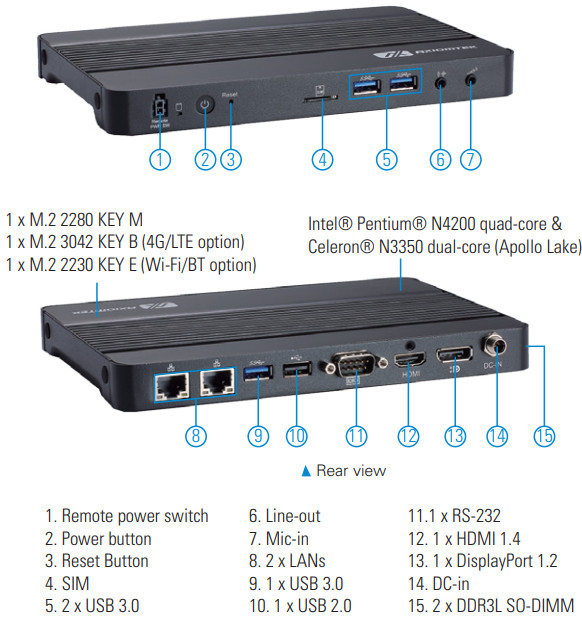 In 2010, Intel launched the Open Pluggable Specification (OPS) to standardize the system architecture between displays and media players. According to Intel, OPS allows for more cost-effective design, deployment, and management of digital signage and other display solutions that support advanced functionality and emerging use cases, including interactivity and anonymous audience analytics. OPS began appearing in signage systems such as the Axiomtek OPS860 back in 2011. The spec standardizes mounting and power requirements and connects to OPS-compatible displays via an 80-pin JAE Electronics TX24/TX25 blind mate plug and receptacle connector system.

The IOPS-602 also provides 4x USB 3.0, HDMI 1.4b and Gbit Ethernet ports, as well as an RS232 serial connection provided via an RJ45 port. You also get dual audio jacks, LEDs, a watchdog and iAMT compliance for remote management. The system supports 0°C to 45°C temperatures and resists vibrations to the tune of 5 Grms, 5 to 500 Hz random operation with an SSD.

Moving on to OPS+

Intel developed a follow-on spec called OPS+ that builds on the benefits and powerful functionality of the OPS by enabling a broader range of Intel processors to include the Intel Xeon processor family, a range of Intel desktop processors and Intel FPGAs. OPS+ can also add functionality based on specific industry needs such as supporting simultaneous display and broadcast usages, support for 8K resolution displays and the ability to drive three individual 4K resolution display outputs.

According to Intel, OPS+ defines a 180 mm x 119 mm x 30 mm, fully enclosed digital signage systems with enhanced thermal design supports broader range of Intel processors. The enhanced spec is optimized for interactive white boards (IWBs), commercial digital signage, kiosks, visual data devices, video walls and so on. With OPS+, you can customize a protocol and simultaneously support advanced use cases including real-time analytics and video capture performed on the display itself. The spec also features a second high-speed connector and is backward compatible with previous OPS specifications. 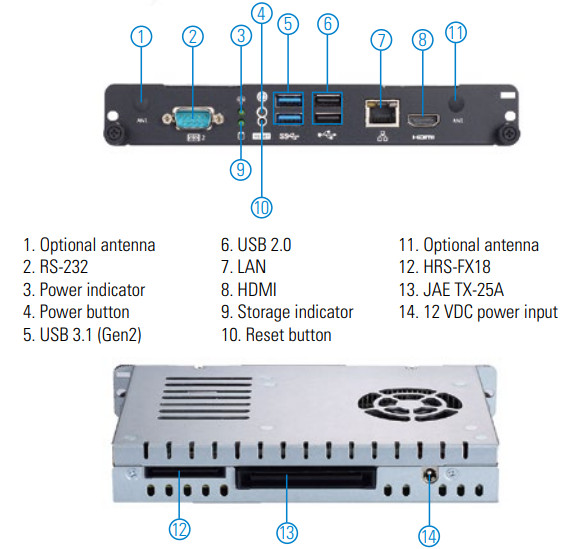 The OPS700-520 is compatible with Intel Unite, which allows users to connect and interact with meeting content in real time, thus enhancing seamless meeting experiences and convenience. It also comes with Intel AMT 11.0. Software issues can be repaired wirelessly while failed hardware components can be identified beforehand, thereby lowering maintenance costs and improving efficiency. The signage module is suitable for multi-display solutions such as IWBs in meeting rooms, commercial digital signage, video walls and more.

The OPS700-520 maintains the small form factor with dimensions of just 200 mm x 119 mm x 30 mm. It comes with rich I/O connectors including two USB 3.1 Gen2, two USB 2.0, one RS-232 (COM 2), one Gbit LAN with Intel i219-LM Ethernet controller and one HDMI. The unit supports Windows 10 64-bit and Linux operation systems. Also, it supports the TPM 2.0 which can provide security and privacy benefits.

A unique twist on tradition digital signage in the emergence of 3D capability. Feeding that need, in October last year EFCO introduced a development and signage solution for creating advanced 3D slot machine games. The company’s 3D Bare-Eye Content Development Kit and Signage Solution was designed to enable developers of casino slot machine games and digital signage displays to provide 3D content that can be viewed without special glasses (Figure 5). 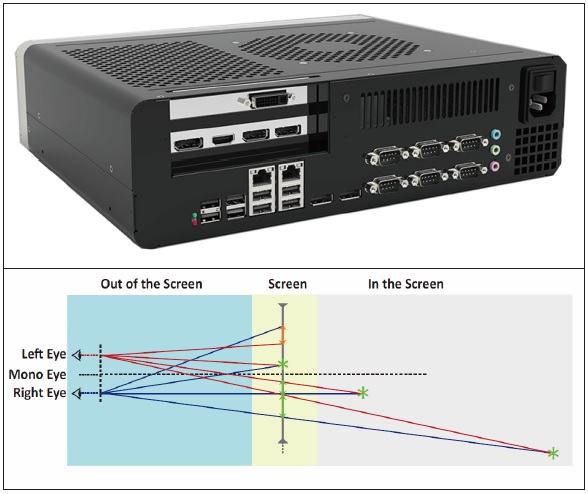 3D Bare-Eye is based on the Unity software environment, which, according to EFCO, is the defacto standard development toolset among game developers. When used for casino games, instead of simply displaying images of coins on the screen, the coins now appear to be falling out of the slot machine toward the player. But the technology can also be used for any digital signage or progressive display application, says EFCO.

The 3D Bare-Eye Solution is made up of a development kit and a broadcast kit. The content development kit is based on Unity. Because Unity is the most common gaming development environment, it’s easy to adopt. The kit also comes with a monitor, computer system and a proprietary interface card that connects the development system to the playback system. Features of the 3D Content Development kit include: Intel Core i5-6500, 4C/4T with boost to 3.6 GHz, NVIDIA GTX1050Ti (4 GB GDDR5) or GTX1070Ti, 2.5″ SATA SSD 256 GB, an average 190 W power consumption and 3840 x 2160 display support.

While dedicated, purpose-built solutions—like the ones discussed so far in this article—are one approach to digital signage applications, another angle is to employ box-level general purpose embedded computers to serve the player functionality. This approach makes sense especially when extreme environmental conditions are an issue. An example along these lines is Logic Supply’s ML100G-31 embedded PC system introduced last August. This system is built around an Intel Dawson Canyon NUC board and employs the company’s Hardshell Fanless Technology to ensure thermal performance. Logic Supply says it’s the smallest fanless and ventless NUC to feature an 8th generation (Kaby Lake) Intel Core i7 processor (Figure 6). 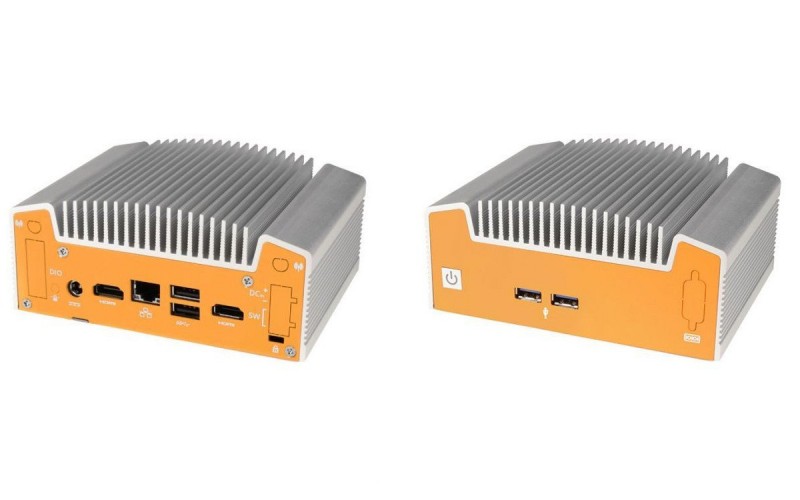 Figure 6
The ML100G-31 embedded PC system is built around an Intel Dawson Canyon NUC board and employs the company’s Hardshell Fanless Technology to ensure thermal performance.

The ML100G-31 provides a fully solid state, passively cooled computing solution, designed for reliability in demanding environments and measures just 142 mm x 62 mm x 107mm. Logic Supply engineers, with support from Intel’s thermal design lab, created a proprietary heatsink for the NUC717DNBE motherboard and Quad-Core i7-8650U Kaby Lake CPU. They also collaborated with Intel to identify a way to ensure that the ML100G-31 features the 5-year lifecycle that will allow their industrial computing clients to standardize on the platform.

The ML100 is able to cool the processor and other internal components by employing Logic Supply’s proven Hardshell Fanless Technology. Through the use of unique exterior fins and specially machined heatsink design, the system is able to maintain an optimal operating temperature without the need for a cooling fan. Removing the fan from the system improves overall reliability. Unlike fanned solutions that are vulnerable to airborne contaminants, this fanless design is able to operate in challenging computing environments across a range of industries including manufacturing and automation, industrial digital signage and others.

The system can be configured with up to 32 GB of memory and 1 TB of M.2 storage. Connectivity includes four USB 3.0 ports, two HDMI ports supporting dual 4K output, Gbit LAN and an optional COM port for legacy equipment connectivity. Operating system options include both Windows and Linux Ubuntu.

System Based on Mini-ITX

In another example of a general-purpose system that’s suited for digital signage, AAEON in September released the ACS-1U01 Series, a range of turnkey solutions that embed three of its bestselling SBCs. By enclosing the boards inside a tough 1U chassis, the unit provides a ready-to-go system for use in a variety of applications including digital signage as well as industrial automation, POS, medical equipment and transportation.

The three models—the ACS-1U01-BT4 (Figure 7), ACS-1U01-H110B, and ACS-1U01-H81B—feature a tough, 44.45 mm-high chassis with a wall mount kit and 2.5″ HDD tray. The low-profile, low-power-consumption systems have full Windows and Linux support, they can be expanded via full- and half-size Mini-Card slots and heatsinks give them operating temperature ranges of 0°C to 50°C. 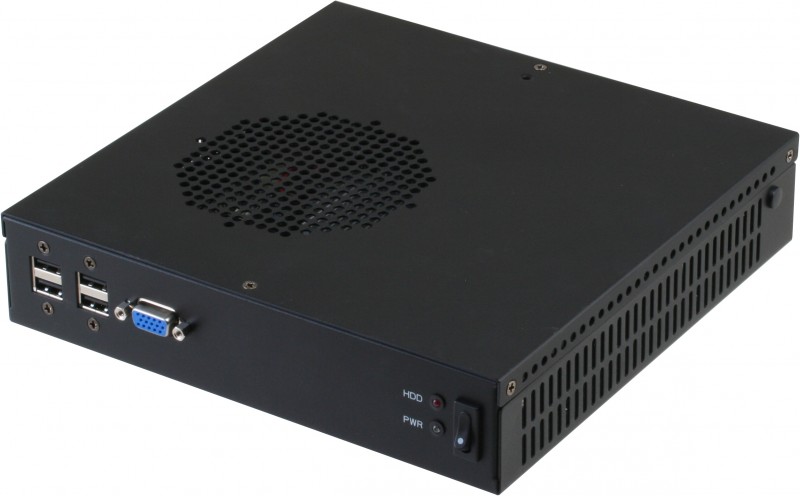 The ACS-1U01-BT4 houses AAEON’s EMB- BT4 motherboard, which can be fitted with either an Intel Atom J1900 or N2807 processor. The J1900 can be used with a pair of DDR3L SODIMM sockets for up to 8 GB dual-channel memory, while the N2807 can be used with a single DDR3L SODIMM socket. The board’s extensive I/O interface provides the system with a GbE LAN port, dual independent HDMI and VGA displays, a USB3.0 port, up to seven USB 2.0 and up to six COM ports.

The ACS-1U01-H110B contains AAEON’s EMB-H110B, which is built to accommodate up to 65 W 6th/7th Generation Intel Core i Series socket-type processors and supports up to 32 GB dual-channel memory via a pair of DDR4 SODIMM sockets. Dual independent display support is possible through two HDMI ports, or the option of DP connections. The system also features a GbE LAN port, four USB 3.0 ports, four USB 2.0 ports and a COM port.

The ACS-1U01-H81B is built around AAEON’s EMB-H81B, which is designed for 4th Generation Intel Core i Series socket-type processors with TDPs of up to 65 W. Two SODIMM sockets allow for up to 16 GB dual-channel DDR3 memory, and HDMI, DisplayPort and optional VGA ports enable dual independent display. The system has two GbE LAN ports, two USB3.0 ports and six USB 2.0 ports.

There’s no doubt that digital signage is an application that puts high demands on a variety of technology segments—from graphics processing to connectivity to form factor design. To keep pace with demands, makers of digital signage players and embedded PCs continue to innovate by adding more capabilities while also shrinking size, weight and power.

This article appeared in the May 346 issue of Circuit Cellar