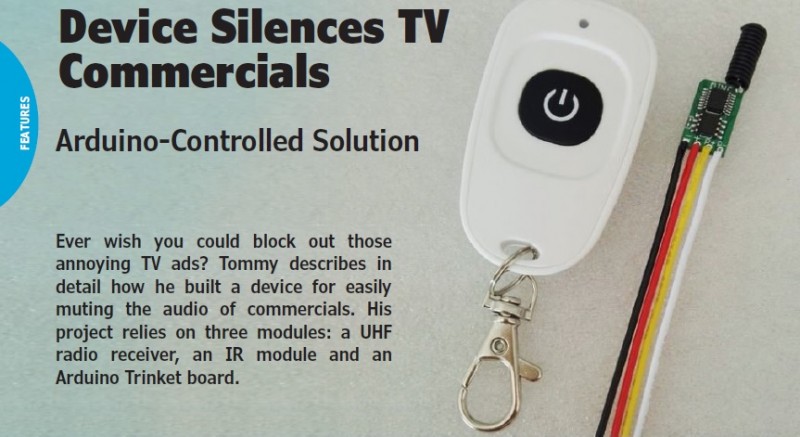 
Ever wish you could block out those annoying TV ads? Tommy describes in detail how he built a device for easily muting the audio of commercials. His project relies on three modules: a UHF radio receiver, an IR module and an Arduino Trinket board.


Does your blood start to boil as soon as one of those people on TV tries to sell you precious metals, a reverse mortgage, a miraculous kitchen gadget or an incredible weight reduction plan? Do you want to climb the wall the next time someone says “But wait! Order now and get a second one free . . .“? Believe it or not, there was a time long ago when TV commercials were actually entertaining. That was before commercial breaks evolved from 30 second or one-minute interruptions into strings of a half-dozen or more advertisements linked end-to-end for three to five minutes—sometimes with the exact same commercial shown twice in the same group! What is perhaps most annoying is the relentless repetition.

Historically, all the feeble attempts at TV commercial elimination have been applied to recordings on VCRs or DVRs. Anyone who watches programming that’s best enjoyed when viewed in real-time—news, weather and sports—has probably wished at one time or another for a device that can enable them to avoid commercials. They long for a device that could be inserted between their TV and the program source—whether it be cable, satellite or an OTA antenna—to instantly recognize a commercial and blank the screen, change channels or somehow make it go away. The technology for doing that does exist, but you’ll probably never find it applied to consumer products. Since funding of the entire television broadcast industry is derived from paid advertisements, any company that interferes with that would face enormous opposition and legal problems.

After many years of searching the Internet I’ve concluded it is wishful thinking to expect anyone to market a product that automatically eliminates commercials in real-time. I decided to work instead on the next-best approach I could think of: A device that makes it quick and easy to minimize the nuisance of commercials with the least amount of manual effort possible. This article describes a “Kommercial Killer (KK)” that is controlled by a small radio transmitter you carry with you so it’s easily and instantly accessible. No scrambling to find that clumsy infrared remote control and aim it at the TV when a commercial starts. Just press the personal button that’s always with you, even while remaining warm and cozy curled up under a blanket.

The KK operates from anywhere in the home, even from another room completely out of sight of the TV and can be triggered at the slightest sound of an advertisement, political message, solicitation or perhaps even a telephone call. It works with any brand and model TV without modifications or complicated wiring connections by using the TV’s infrared remote control system. If you get a new TV, its remote control can easily teach KK a different MUTE command. Don’t worry about leaving the room with the TV muted. KK automatically restores audio after a certain amount of time. The default time is three minutes, the length of a typical commercial break, but you can easily configure this to any amount of time you prefer. And when you want to restore audio immediately—for example if you have muted non-commercial program material by mistake or if a commercial runs shorter than expected—just press your transmitter button again.

Figure 1
Schematic of the Kommercial Killer

KK is built mainly from three commercially available modules that do all the heavy lifting (Figure 1). The first module is a miniature UHF radio receiver. The second is an infrared module that can learn and mimic the TV mute signal. The third module is an Arduino Trinket board that provides commercial break timing and overall control. This article explains how to load a small program into that module without needing any special equipment or training, and even if you have absolutely no previous experience with Arduino devices.

The three modules are small and inexpensive ($7 to $10 each) and with just eight additional components KK can be built on an open perf board, strip board or enclosed in a 6-inch3 box. It is powered from the same USB Micro cable you use to load or modify the Arduino program, or from any other available USB port or 5 V charger.

The best UHF radio transmitters and receivers are all manufactured in China, and there are no major distributors in the U.S. So, order this item early and be prepared to wait about 20 days for delivery. After sampling many different remote controls to evaluate performance, quality, cost and shipment, I selected a product manufactured by the Shenzhen YK Remote Control Electronics Company, whose products are sold and shipped through AliExpress. Shenzhen remote controls use two types of receivers. . …

After you’ve read the full article, don’t forget to go the the Article Materials Page for useful links and information.
Don’t miss out on upcoming issues of Circuit Cellar. Subscribe today!
CC Subscribe
Note: We’ve made the October 2017 issue of Circuit Cellar available as a free sample issue. In it, you’ll find a rich variety of the kinds of articles and information that exemplify a typical issue of the current magazine.