Covering the Basics
by Robert Lacoste

Now that wireless communications is ubiquitous, chances are you’ll be using Bluetooth,
Wi-Fi, cellular, LoRa, MiWi or other flavor of wireless interface in your next design. And that means including an antenna. Unfortunately, antenna design is not an easy topic. Even very experienced designers sometimes have had to wrestle with unexpected bad performances by their antennas. Case in point: Google “iPhone 4 antenna problem” and you will get more than 3 million web pages! In a nutshell, Apple tried to integrate a clever antenna in that model that was threaded around the phone. They didn’t anticipate that some users would put their fingers exactly where the antenna was the most sensitive to detuning. Was it a design flaw? Or a mistake by the users? It was hotly debated, but this so-called “Antennagate” probably had significant impact on Apple’s sales for a while.

Some Antenna Basics
Let’s start with some basics on antennas. First, all passive antennas have the same performance whether transmitting or receiving. For this article, I’ll consider the antenna as transmitting because that’s easier to measure. Let’s consider an antenna that we inject with a given radio frequency power Pconducted into its connector. Where will this power go? First off, impedance matching should be checked. If the impedance of the antenna is not well matched to the impedance of the power generator, then a part of the power will be reflected back to the generator. This will happen in particular when the transmit frequency is not equal to the resonant frequency of the antenna. In such a case, a part of Pconducted will be lost. That is known as mismatch losses: Pavailable= Pconducted – MismatchLosses. While that itself is a very interesting subject, I have already discussed impedance matching in detail in my February 2008 article. I also devoted another article to a closely linked topic: standing waves. Standing waves appear when there is a mismatch. The article is “The Darker Side: Let’s play with standing waves” (Circuit Cellar 271, February 2013).

For the purpose of discussion here, I will for now assume that there isn’t any mismatching—and therefore no mismatch loss. The full Pconducted power is available for the antenna. A significant part of this power will hopefully of course be radiated into space. Let’s call that part Pradiated. Because the antenna is not perfect, Pradiated will for sure be lower than Pavailable. Remember that power is never actually lost or created from nothing. That means the difference Pavailable – Pradiated is dissipated somewhere—meaning either the antenna or its surroundings will warm up a little. This allows to define the first—and an important— performance characteristic of an antenna: power efficiency. By definition, the power efficiency of an antenna is the ratio between Pradiated and Pavailable. If all the available power is radiated by the antenna then its efficiency would be 100%. But in reality, small antennas made with small conductors have low efficiency. Meanwhile, large antennas built using thick and gold-plated conductors will usually have high efficiency.

Now let’s talk about the gain of the antenna. The concept is illustrated in Figure 1. Any antenna has a given radiation pattern, which means it transmits more power in certain directions of space. An antenna which would radiate the same power in any direction is called an isotropic antenna—but those don’t exist except as a concept. Such an isotropic antenna is taken as a reference, and a real antenna is compared to it. Imagine that you take a test receiver and move it around the antenna under test at a constant distance from it. You can find out the direction where the transmitted power is the highest. Then you compare that to the transmitted power of a theoretical isotropic antenna with the same input power. The difference between the two is called the gain of the antenna and is expressed in dBi. dBi is the decibel compared to an isotropic antenna—“i” for isotropic. Remember that a decibel is just the ratio of two powers—expressed using a logarithmic scale: decibel = 10 log (Pout/Pin) 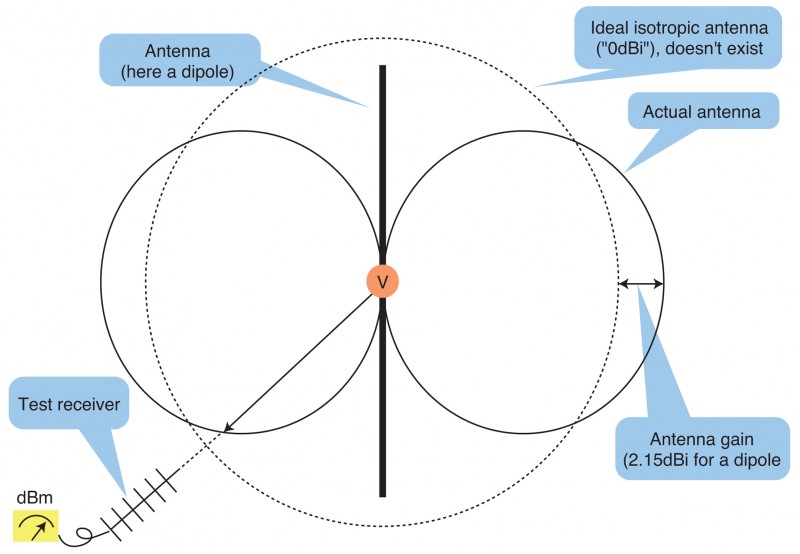 Figure 1
By definition, the gain of an antenna is the difference between its radiated power and the power radiated by an isotropic antenna, measured in the direction where its radiation is maximal.

You may be wondering: How is this gain linked to the efficiency I talked about earlier? The relationship is far from obvious. In fact, the gain of an antenna concerns its directivity. When an antenna radiates a strong signal in a given direction, its gain is high—even if this radiation occurs in a very narrow angle. In contrast, the efficiency is linked to the total radiated power of an antenna. To measure it you would need to evaluate the transmitted power in all directions and sum them all—an operation that mathematicians call an integration. More exactly the total radiated power is the integral of the radiated power over a sphere. Of course, a lower efficiency also implies a lower gain as the total available power is reduced. But a low efficiency antenna can still have high gain. Aren’t you convinced? Consider a huge parabolic antenna—it could have gain of +30 dBi. This means that the radiated power is focused in a very narrow direction. And in that direction a receiver will see a signal 30 dB higher than if using an isotropic antenna. Of course, the antenna is not creating any power. It’s just focusing it, like a lens focuses light. Now add a 20 dB attenuator between the transmitter and the parabolic antenna—dividing the power by 1020/10 = 100). The overall gain will still be a reasonable 30-20=10dBi—even if 99% of the power will be dissipated in the attenuator.