In his March article, George reviewed the major aspects of acceleration, along with its measurement and the design fundamentals of the sensors known as accelerometers. Here, he expands on the topic exploring the electronics portion of accelerometers along with a look at how MEMS technology plays a role in these sensors.


The key aspects of accelerometers can be loosely categorized by their acceleration range, frequency response and typical applications as shown in Table 1. Many characteristics must be taken into account when selecting an accelerometer suitable for the given task. Besides having to satisfy the required range of acceleration to be measured, you must consider the measurement resolution, accuracy, bandwidth, stability and repeatability. Just as important are the weight, size, cost, electrical interfaces, power consumption, availability and operating environmental conditions. And don’t forget susceptibility to the effects of conducted and radiated emissions, that is electromagnetic interference (EMI).

Fundamentally, accelerometers are electromechanical devices—as I have shown in my March 2018 article (Circuit Cellar 332). Electronics play only a supporting role—needed to convert the displacement of the proof (also called seismic) mass into a useful electrical signal. Accelerometer interfaces can take many forms, both analog and digital. 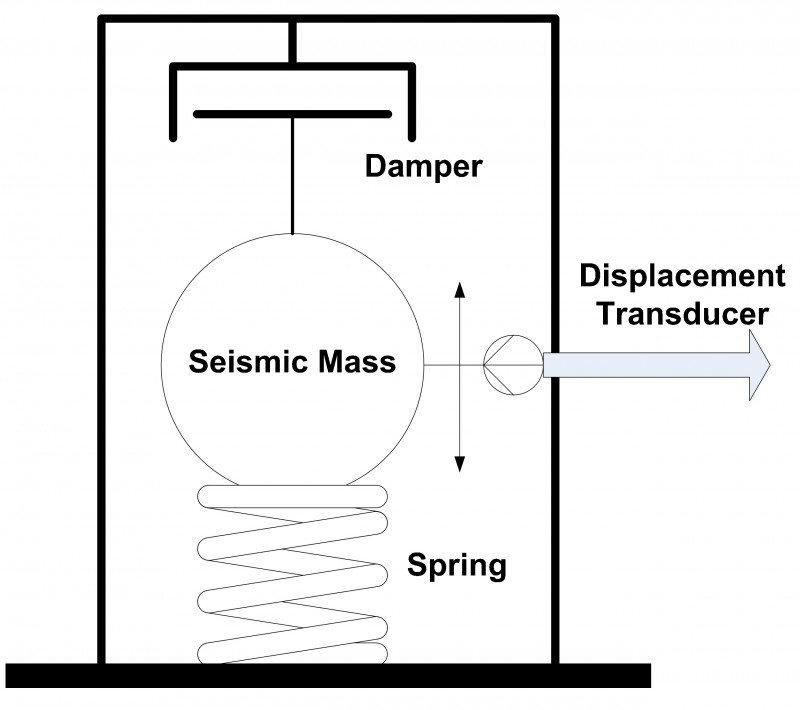 Figure 1
The mechanical principle of an accelerometer

The behavior of the mechanical system illustrated in Figure 1 is described by just a few simple equations, where the variables are the force F = kx developed by the spring, the opposite force F = Dv developed by the damper and the seismic mass’ inertial force F = Ma. Consequently, the static displacement of the mass equals to:

The combination of the spring, the damper and the mass form a second-order system. Such a system, when exposed to varied acceleration of angular frequency ω which equals to 2πf, exhibits dynamic behavior described by equation:

The resonant frequency of this system will be:

and the quality factor:

The frequency response of such a system was shown in the March issue. The parameter ξ is the system damping factor.

At present, the most popular manufacturing technology for accelerometers as well as many other inertia-based sensors—such as gyroscopes—is MEMS. MEMS is an acronym for “micro electro-mechanical system.” MEMS accelerometers measure the proof mass displacement by piezoresistive or capacitive sensors.  …